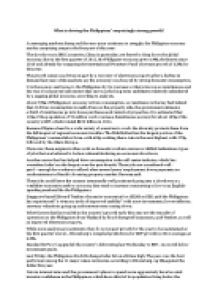 What is driving the Philippines' surprisingly strong growth

﻿What is driving the Philippines' surprisingly strong growth? As emerging markets slump and the euro zone continues to struggle, the Philippine economy made a surprising surge in the first part of this year. The slowdowns in BRIC countries, China in particular, are feared to drag down the global economy. But in the first quarter of 2012, the Philippine economy grew 6.4%, the fastest since 2010 and already far outpacing the International Monetary Fund's forecast growth of 3.5% for this year. The growth surge was driven in part by a recovery of electronics exports after a decline in demand last year, while analysts say the economy was buoyed by strong domestic consumption. ...read more.

The Middle East has the largest portion of the Philippines' overseas labor force, with 61% working there. Asia is the next highest, with 27%, followed by the 6% in Europe. Moreover, these migrants often work as domestic workers, nurses or skilled technicians, types of jobs that are believed to be less vulnerable during an economic slowdown. Another sector that has helped drive consumption is the call center industry, which has overtaken India's as the largest over the past decade. These jobs are considered well - paid -- enough for workers to afford, after several years' employment, down payments on condominiums in Manila's booming property market, Narvaez said. ...read more.

Standard & Poor's upgraded the country's debt rating last Wednesday to BB+, one notch below investment grade. Last Friday, the Philippines Stock Exchange Index hit an all-time high. The peso was the best performer among the 11 major Asian currencies, according to Bloomberg, up 5% against the dollar this year. Cuts in interest rates and the government's plans to spend more aggressively have boosted investor confidence in the Philippines, which has a third of its population living below the poverty line of $1.25 per day. Economists also credit President Benigno Aquino for his efforts to push back corruption and undertake infrastructure projects. "You can see evidence of construction activity in Manila," Teather said. "You can see cranes on the horizon. You can see new roads have been put in place." ...read more.