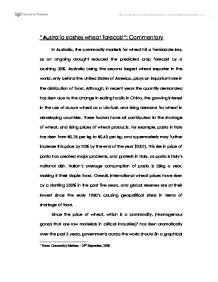 "Australia slashes wheat forecast": Commentary In Australia, the commodity markets for wheat hit a formidable loss, as an ongoing drought reduced the predicted crop forecast by a crushing 30%. Australia being the second largest wheat exporter in the world, only behind the United States of America, plays an important role in the distribution of food. Although, in recent years the quantity demanded has risen due to the change in eating habits in China, the growing interest in the use of durum wheat as a bio-fuel, and rising demand for wheat in developing countries. These factors have all contributed to the shortage of wheat, and rising prices of wheat products. For example, pasta in Italy has risen from �0.26 per kg to �0.45 per kg, and supermarkets may further increase this price by 20% by the end of the year (2007). ...read more.

or economy)3 - the drought in Australia - the supply (the quantity of goods and services that producers are willing and able to produce for a given time period, ceteris paribus)4 of wheat has decreased dramatically, which has caused a shortage (A deficiency in amount; an insufficiency)5 of it on the global market. Shifting the demand curve left can be done though manipulating the non-price determinants of demand for wheat. Some realistic options of doing this are: the Italian government can reduce taxes to give people a higher income (buy less pasta), the Chinese government can increase income taxes to lower people's income (buy less meat), negative advertising of wheat and lowering the price of substitutes for wheat (buckwheat, rice, soy products, or other grains). In Italy, since pasta is an inferior good (Items for which an increase in income results in a fall in the amount bought e.g. ...read more.