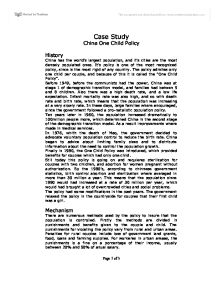 China has the world’s largest population, and it’s cities are the most densely populated ones. It’s policy is one of the most recognized policy, since is the most rigid of any country. The policy admites only one child per couple, and because of this it is called the “One Child Policy”.

Before 1949, before the communists had the power, China was at stage 1 of demographic transition model, and families had betwen 5 and 8 children. Also there was a high death rate, and a low life expectation. Infant mortality rate was also high, and so with death rate and birth rate, which means that the population was increasing at a very slowly rate. In these days, large families where encouraged, since the government followed a pro-natalistic population policy.

Ten years later in 1960, the population increased dramatically to 100million people more, which determined China in the second stage of the demographic transition model. As a result improvements where made in medical services.

In 1976, whith the death of Mao, the government decided to advocate voluntary population control to reduce the birth rate. China began to advice about limiting family sizes and to distribute information about the need to control the population growth.

Finally in 1980, the One Child Policy was introduced, which provided benefits for couples which had only one child.

Still today this policy is going on and requieres sterilization for couples with two children, and abortion for women pregnant without authorization. By the 1980’s, according to chinnese government statistics, birth control abortion and sterilization where averaged in more than 30 million a year. This means that the population since 1980 would had increased at a rate of 30 million per year, which would had brought a lot of overcrowded cities and social problems.

The policy had some modifications in the past years. The government relaxed the policy in the countryside for couples that their first child was a girl.

There are numerous methods used by the policy to insure that the population is controlled. Firstly the methods are divided in punishments and benefits given to the couple and child. The punishments for violating the policy vary from rural and urban areas. Penalties for rural couples include loss of government land grants, food, loans and farming supplies. For workeres in urban areaas, the punishments is a fine on a porcentage of their income, usually between 20% and 50% of anual salary.

The incentives given by the government include additional health care subsidies, priority health care, priority housing allocation, priority in educational provision, extra land for private farming and extra food rations. Furthermore, every worker which applies the One Child Policy recieves a financial bonus. If parents have a second child wether accidentally or in purpose, all the privileges that have been given are taken out.

In the other hand, there are some exceptions which are concidered by the government. The first one applies to families living in rural areas, who may have two children since these children will be part of the farming work force. The second exceptions was applied in 1995 to couples which are single childs, if any couple has this characteristic they may have a second child. Also, if the first child who is born is unabled to work because of mental or fisical problems, the couple is able to have a second child. In the rural areas, couples with real difficulties economically may have a second child as well.

There also have been consequences in the policy. In 1983, family planning work teams acrries out 21 million sterilisations, 18 IUD insertions, and 14 million abortions. There were concerns about children who where born and grew up without brothers or sisters, where becoming spoilt and selfish, since they never experienced the chance of having brothers or sisters and share different things with them. Also single children in China had almost all their desires fullfilled since they where the only childrens, and their parents had economical benefits, which leads to a better salary and higher money to spend in their children. These childrens where called in China little emperors. Furthermore the concepts of “uncle”, “aunt”, “cousing” had dissapeared along with “sister” and “brother”.

In recent years, the policy has come to be treated less seriously in some areas of the country. In Guangdong, sound-east of China, families with two children were becoming quit common. This happened because the city was quite wealthy, and people living there felt that they could afford mora that one child by paying the fies. Also people who were self-employed felt free to have more than one children, because, unlike government employees, they did not needed official permission to have a children.

When the government introduced the policy in 1980, the target was to limit its population to 1.3 billion people by 2000, and to lower the natural population growth to less thatn 10/1000 people. The introduction of the One Child Policy in China had an inmmediate effect on the population growth, since the natural population growth dicreased dramatically. In 1960 China’s birth rate was 37 births per 1000 people, then by 1988 it felt to 21 per 1000 people, and by 1998 to 16,2 births per 1000. In 1960 China’s population was growing at a re of 2% anually. By 1878, before the policy was introduced, it was just 1.4% per year. When the policy was introduced in felt again up to 1.2% per year, and in 1998, the growth rate was 1.042%. Furthermore over the past three decades of the policy, China’s government prevented the birth of 400 million babies. This means that the government achieved in only 30 years what normal developed countries have done with population control targets in 100 years.
Since the policy was instituted, the average number of children for each Chinese couple had dropped from nearly six in the early 1970s to 1.8 today.

China’s government predict that the proportion of women of childbearing age dicreased to 26.7% in 200 and will continue dicreasing. In 2020 the percentege will be 24.5% and 21.9% in 2040. Meanwhile the percentage of aged people is increasing and will continue to increase rapidly. The percentage of aged people in 1982 was 7.63%, in 2000 was 9.84% and is expected to increase to 21.9% by 2030. Also by 2050 the proportion of China’s population that is aged will be 27% which will pose significant challenges for the provision of services for the elderly.

The Chinese government is facing an important challenge: theneed to balance the basic human right of reproduction with populationgrowth, which, despite the policy's success, is still increasingat a rate of 8 per 1000 million people per year. Several factors mus be taken to make decisions about the future.

The relaxation of the policy could happen, if fertility aspirations such as the baby boom dont appear. With the incorporation of the One Child Policy, China became a small family culture, which means that women now a days are not internested in having more than 2 children. Data was recolected in China, and showed that 35% of the women preferred having 1 child, 57% wanted to have 2 children, which as a result only 5% of women wanted to have more than 2 children. As the data was analized, there is a posibility of relaxing the policy, so that couples fill free to have 2 children or 3 in some cases, since the culture had changed, and now a days couples are no more interested in having large families of 5 to 8 children.

A really good overview of the One Child Policy in China. It started off too brief with little discussion of why the policy was needed. However, it develops into a detailed and relevant overview of the incentives and punishments of the policy and reviews both the successes and challenges that have resulted.