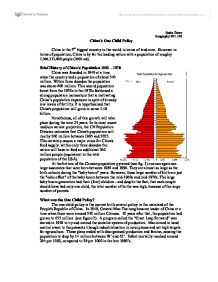 Sasha Zouev Geography 09/11/05 China's One Child Policy China is the 3rd biggest country in the world in terms of land area. However in terms of population, China is by far the leading nation with a population of roughly 1,306,313,000 people (2005 est). Brief History of China's Population 1905 - 1978 China was founded in 1949 at a time when the country had a population of about 540 million. Within three decades the population was above 800 million. This record population boost from the 1950s to the 1970s fashioned a strong population momentum that is motivating China's population expansion in spite of already low levels of fertility. It is hypothesized that China's population will grow to some 1.48 billion. Nonetheless, all of this growth will take place during the next 25 years. In its most recent medium variant projection, the UN Population Division estimates that China's population will rise by 260 million between 1995 and 2025. This certainly causes a major crisis for China's food supply: within only three decades the nation will have to feed an additional 260 million people (equivalent to the total population of the USA). ...read more.

Mao aimed to hand control oveer to the peasants trhough industrialisation in rurul places and set high targets for agruculture. These plans ended with disorganised production and famine, causing the population to drop by 14 million between 59' and 62'. Infant mortality reached around 284 per 1000, compared to 38 per 1000 in the late 1990's. The government introduced a family planing programme, that acted as a national policy of one child to urban couples, while couples in the countryside are "allowed" two children and cannot have three. How was it necessary? The one-child policy was established to limit communist China's population growth. It limits couples to one child. Fines, pressures to abort a pregnancy, and even forced sterilization accompanied second or subsequent pregnancies. The sheer size of the Chinese population puts increased demands on services such as food, housing, education and employment. Moreover, during the 1970's, the Chinese government feared that further population growth would cause a mass starvation by the end of the century. ...read more.

But it is considered that this is the effect of widespread underreporting of female births, in addition to the prohibited practice of s*x-selective abortions which is possible due to the extensive availability of ultrasound. Whilst the reported proportion between male and female births in China does fluctuate considerably from the natural baseline, it is similar to the ratios in Taiwan, South Korea, and India, who do not have a firm family planning policy. Conclusion / How does this throw light onto the Malthus v. Boserup debate? In relation to the Malthus and Boserup theories, it becomes quiet apparent that what Malthus hypothesized has indeed lead to some truth in China. There are indeed famines in many areas of China, where there simply is not enough food to feed the hungry mouths of rural children. However it must also be kept in mind, that China is arguably the world's fastest growing and still thriving economies, with many financial possibilities, supporting Boserup's argument that a vast population leads to great technological advances. Initially, the reason that China has such overpopulation problems is because the government believed Boserup's theories to extreme depths, and there were simply too many people to handle - depicting Malthus's hypothesis. ...read more.

A mixed review of the one child policy in China. It does not give much detail on the policy itself (i.e. the incentives and punishments) but does give some background as to why the policy was brought in.
3 stars