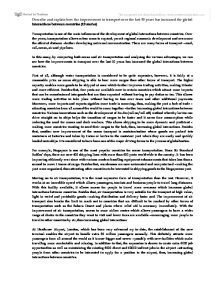 Describe and explain how the improvement in transport over the last 50 years has increased the global interactions between countries.

This allows shipping to be more dynamic and proficient -making more countries wanting to send their cargos to the hub, thus, increasing global interactions. Besides that, another new improvement of the ocean transport is containerisation where goods are packed into containers at factories and taken by trains or lorries to the container port where they are easily and quickly loaded onto ships. It is considered to have been one of the major driving forces in the process of globalisation. For example, Singapore is one of the most popular countries for ocean transportation. Since Sir Stamford Raffles' days, there are now 400 shipping lines with more than 600 ports worldwide in the country. It has been improving efficiently ever since with various modern handling equipment enhancements that takes less than a second to move 1 tonne of cargo. ...read more.

With the improvement of air transportation, access to more airline routes which allows passengers to have a wider range of choice to the countries they want to visit and lower fares are available -encouraging more people to travel to other countries by air, thus increasing global interactions. At Heathrow Airport, London, which has been very advanced up to date, the establishment of the new terminal enables the airport to handle extra 30 million passengers annually. This definitely attracts more passengers from all around the world as it is now bigger and newer -possibly with new facilities which make travelling more comfortable and relaxing. In addition to that, the expansion is shown to create extra 6000 job opportunities as well as maintaining the existing 8000 direct and 60000 indirect jobs in the airport -attracting people from other countries to be interested to apply for a position in the airport, thus, increasing global interactions between countries. ...read more.

An excellent review of the ways in which air transport and ocean transport increase global interactions with excellent case study choice. Just needs a conclusion at the end to finally answer the question.
4 star