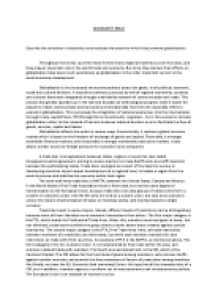 Describe the variations in trade blocs and evaluate the extent to which they promote globalisation.

﻿GEOGRAPHY ESSAY Describe the variations in trade blocs and evaluate the extent to which they promote globalisation. Throughout the world, countries have formed many regional trade blocs over the years, and they play an important role in the world trade and economy. But since they started, their effects on globalisation have been much questioned, as globalisation is the other important current in the world economy development. Globalisation is the increased interconnectedness across the globe, in all political, economic, social and cultural divisions. It describes continuous process by which regional economies, societies and cultures have been integrated through a worldwide network of communication and trade. This process has greatly speeded up in the last two decades as technological progress make it easier for people to travel, communicate and do business internationally. But the term especially refers to economic globalisation. This is precisely the integration of national economies into the international through trade, capital flows, FDI (Foreign Direct Investment), migration? So in this economic context, globalisation refers to the removal of barriers between national borders so as to facilitate the flow of goods, services, capital and labour. Globalisation affects the world in various ways. Economically, it realises a global common market which is based on the freedom of exchange of goods and capital. ...read more.

And finally, we have the EU, Economic (and monetary) Union: this type has all the characteristics of a CM, but in addition, members agree to a uniform set of macroeconomic and microeconomic policies. The European Union is an example of economic union. But some opponents of trade blocs believe that such agreements are detrimental to global free trade. Since the 1960s, an important motivation of development of trading blocs is to compete with the outside world. The fast development of the EU and Japan reminded the United States of its rather decreasing position in the world economy. So the USA started thinking about Canada and Mexico, which are two of its closest countries. So far, Canada and Mexico also wished for their products to enter the American market and to attract more of the American investment. Thus, the three countries formed in 1992 the NAFTA. In addition, NAFTA?s development was an opportunity for establishing a unique relationship between a relatively poor Third World nation and two of the world?s richest countries. But in recent years, trade blocs have been increasingly common and popular in the world. For example, the NAFTA has achieved positive results. Indeed, the links between the USA, Canada and Mexico have increased: US transnational corporations have moved to Mexico and have reaped higher profits, and Canada exports to the USA increased by 80% and by 65% to Mexico in the first five years of NAFTA. ...read more.

Also, there are many other factors more influential in contributing to globalisation that have nothing to do with trading blocs. The most important factors contributing to globalisation include: the growth of TNCs, better technology which makes global communication and transport easier, improved transport and communication which helps reduce barriers of distance, tariff reductions and the promotion of free trade. Examples showing how trade blocs hinder globalisation are the critics of NAFTA within the USA citing the growth of the merchandise trade deficit, as well as Mexico ?swapping? one kind of trade dependence for another and the fact that Mexican government didn?t prepare the country enough for such a change; indeed, Mexican farmers have been really hard hit by it. In conclusion, if we look at the major motivation of a trading bloc, which is competing with other regions and countries, we can say that trading blocs do hamper globalisation to some extent. A prove is the fact that they changed the pattern of the world economy and divided the world into trading areas. But still there isn?t any contradiction in their nature: they both pursue free trade, and they both require their member countries to transfer some of their economies. The difference is that trade blocs concentrate within a region while globalisation is on the global level ?as its name indicates it. Therefore, their contradiction doesn?t lie on their nature, but on their scale. So it is ?normal? that trading blocs and globalisation coexist in the same time. ...read more.