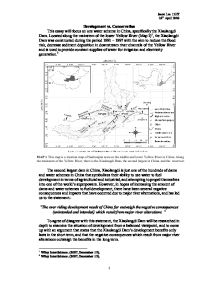 Development vs. Conservation - A Debate

Development vs. Conservation This essay will focus on one water scheme in China, specifically the Xiaolangdi d*m. Located along the mainstem of the lower Yellow River (Map 1)1, the Xiaolangdi d*m was constructed during the period 1991 - 1997 with the aim to reduce the flood risk, decrease sediment deposition in downstream river channels of the Yellow River and is used to provide constant supplies of water for irrigation and electricity generation.2 The second largest d*m in China, Xiaolangdi is just one of the hundreds of dams and water schemes in China that symbolizes their ability to use water to fuel development in terms of agricultural and industrial, and attempting to propel themselves into one of the world's superpowers. However, in hopes of increasing the amount of dams and water schemes to fuel development, there have been several negative consequences and impacts that have occurred due to major river alternations, and has led us to the statement:- "The over riding development needs of China far outweigh the negative consequences (unintended and intended) which result from major river alterations." To agree of disagree with this statement, the Xiaolangdi d*m will be researched in depth to examine the situation of development from a balanced viewpoint, and to come up with an argument that states that the Xiaolangdi d*m's development benefits only lasts in the short term, and that the negative consequences which result from major river alterations outweigh the benefits in the long term. ...read more.

In 2006, China surpassed Japan as the world's No. 2 auto market, with total sales of 7.2 million vehicles and production of 7.3 million. In 2007, China also became the world's top producer of merchant ships. In short, this is clear evidence that China is developing industrially, and this industrial revolution of theirs needs to be fueled by electricity.9 Thus, as seen in graph 2, the production of electricity has increased, and water schemes such as Xiaolangdi d*m will contribute to the generation of electricity to fuel their industrial revolution. Graph 2 An increase in the production of Electricity to meet demands of the public can be pinpointed down to several reasons, one of them being an increase in water schemes such as the Xiaolangdi d*m. It is through this industrial boom that the GDP (Purchasing Power Parity, Graph 3). Due to this, the overall standard of living and quality of life in China has increased dramatically as well. With money, people can afford to purchase better food, get quality education, buy better clothes and housing, etc. This impact can be seen in the falling unemployment in the last few years (Graph 4), the increasing literacy rate of Chinese (Graph 5), the decreasing infant mortality rate (Graph 6) and the increasing life expectancy of the Chinese (Graph 7). In fact, the Chinese government predicts that the average life expectancy in China will jump 12 years to 85 years and all households will be lifted out of poverty by the middle of the century.10 Through ...read more.

However, after completing the Xiaolangdi d*m, there were unintended consequences that come into effect, most notably the damaging of the environment and the ecosystem of the river. With this being taken into consideration, in the long term, the negative consequences do outweigh the benefits and needs for development, and thus the Xiaolangdi d*m shouldn't have been built. 13 However, it should be noted that these consequences were unintended, and this is not just due to the fact that China has a different government system, but also because they have a lack of experience. With experience comes knowledge, and America is the best example. America also had the same experience as China did, except hundreds of years ago. They built dams in order to fuel development, and they believed that this was the best way to do so. However, after many years, it seems as if they have finally learnt from their experience, and that the negative consequences outweigh the benefits and the need for development. That is why in some places, they are actually removing the dams as they have figured that the damage associated with the building of a single d*m can extend the entire length of a river and beyond.14 That is why China will have to both take America's experience and use it, or they may have to learn the hard way. Nevertheless, in the long run, the negative consequences which result from major river alterations definitely outweigh the needs and benefits of development, and thus, water schemes should be carefully considered before it gets the go head. ...read more.