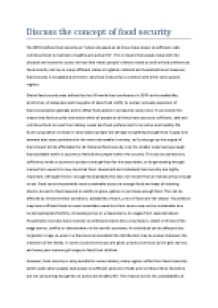 Discuss the concept of food security

﻿Discuss the concept of food security ________________ The WHO defines food security as: ?when all people at all times have access to sufficient, safe, nutritious food to maintain a healthy and active life?. This is means that people have both the physical and economic access to food that meets people?s dietary needs as well as food preferences. Food security can be on many different scales at a global, national and household level. However, food security is not global and there is also food insecurity to contend with at for some poorer regions. Global food security was defined by the UN world food conference in 1974 as the availability, at all times, of adequate world supplies of basic food stuffs, to sustain a steady expansion of food consumption globally and to offset fluctuations in production and prices. ...read more.

Food secure households need sustainable access to enough food and ways of resisting shocks. Access to food depends on ability to grow, gather or purchase enough food. This can be affected by environmental conditions, availability of work, price of food and the season. Households may have sufficient food to meet immediate needs but their source may not be sustainable due to decreasing land fertility, increasing prices or a dependence on wages from seasonal labour. Households must also have reserves to withstand shocks like a crop failure, death or illness of the wage earner, conflict or deterioration in the world?s economy. An individual can be affected due to gender or age, as even in a food secure household the distribution may be uneven between the members of the family. ...read more.

This is when hunger is found in areas where food is available in supply and in fact increasing in production. When FED is the cause of food insecurity is important to look at the political and economic situation of the community concerned, and also how food is produced distributed and consumed. It also shows that there are barriers to food e.g. rising costs relative to wages. Looking at Amartya Sen?s work in 1981 there are complex causes of food insecurity and famines (etc.) where physical factors can be a catalyst. The human and natural causes of food insecurity are combined with a vulnerability which leads to food insecurity. Food security and food insecurity are linked as they are two halves of the same problem. Firstly the scale of food security varies greatly spatially whereas food insecurity changes depending on the economic and political situation of the area, it also depends on the vulnerability to effects, both physical and human, in the area. ...read more.