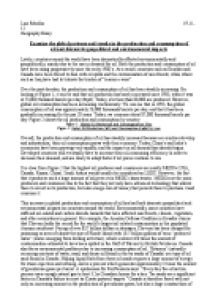 Examine the global patterns and trends in the production and consumption of oil and discuss its geopolitical and environmental impacts.

﻿Luis Rebollar 19-11-12 Geography Essay Examine the global patterns and trends in the production and consumption of oil and discuss its geopolitical and environmental impacts Lately, countries around the world have been dramatically affected environmentally and geopolitically, mainly due to the rise in demand for oil. Both the production and consumption of oil have been rising progressively since the early 1980?s. As a result, countries such as Ecuador and Canada have been forced to deal with oil spills and the contamination of rain forests, while others such as Iraq have had to tolerate the burden of ?resource wars?. Over the past decades, the production and consumption of oil has been steadily increasing. By looking at Figure 1, it can be said that oil production has barely increased since 1983, when it was at 53,000 thousand barrels per day (tbpd). Today, a bit less than 80,000 are produced. However, global oil consumption has been increasing continuously. We can see that in 1993, the global consumption of oil was approximately 56,000 thousands barrels per day, and that it has been gradually increasing for the pas 20 years. ...read more.

This increase in global production and consumption of oil has had both dramatic geopolitical and environmental impacts on countries around the world. Environmentally, some countries have suffered oil-related and carbon dioxide hazards that have affected rain forests, climate, vegetation, and other ecosystems in general. For example, the Amazon Defense Coalition in Ecuador claims that Chevron holds the record for the world?s largest oil-related contamination in the populated Amazon rainforest. Facing of over $27 billion dollars in damages, Chevron has been charged for poisoning an area of almost the size of Rhode Island with 18.5 billion gallons of toxic ?produced water? (water emerging from drilling activities), which is about 450 times the amount of contamination estimated to have been spilled in the Gulf of Mexico by British Petroleum. Canada also faces environmental problems due to increasing consumption of oil. ?Bitumen? (naturally occurring mixtures of water, sand, and dense oil found in the tar sands of Canada) is a type of oil sand found in Canada. Making liquid fuels from these oil sands requires a large amount of energy for steam injection and refining, and is a process which generates approximately 3 times the amount of greenhouse gases per barrel. ...read more.

The Iraq is an example of this, since it was this first century?s ?resource war? - a war in which two powerful countries use force and violence to secure valuable commodities. Sir David King, UK government?s chief adviser, says: ?With population growth, natural resources dwindling, and seas rising due to climate change, the squeeze on the planet will lead to more conflict.? In conclusion, the global production and consumption of oil has been progressively rising for the past two decades due the rising demand of oil. And consequently, several countries around the world have been dealing with its environmental and geopolitical outcomes. Countries such as Canada and Ecuador have been forced to deal with oil spills and the contamination of their rain forests, while others such as Iraq and Greenland have had to tolerate the burden of ?resource wars? or are otherwise concerned with the rising demand for oil and the unpleasant outcomes it could lead into. "The result of oil exploration, extraction and spills is that many people in the have to drink, cook with, and wash in polluted water; they have to eat contaminated fish ? if they are lucky enough to still be able to find fish ? and farm on spoiled land."- Kate Allen of Amnesty International ...read more.