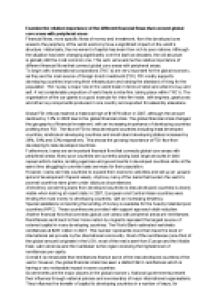 ï»¿Examine the relative importance of the different financial flows that connect global core areas with peripheral areas Financial flows, more specific flows of money and investment, from the developed core areas to the periphery of the world economy have a significant impact on the world’s structure. Historically, the movement of capital has been from rich to poor nations. Although the situation has been changing significantly over the last two decades, the old structure is globally still the most common one. This work will examine the relative importance of different financial flows that connect global core areas with peripheral areas. To begin with, transnational corporations (TNC´s) are very important for the global economy, as they are the main source of foreign direct investment (FDI). FDI mostly supports developing countries improving their infrastructure and raising the standard of living for the population. TNC´s play a major role in the world trade in terms of what and where to buy and sell. A not considerable proportion of world trade is intra-firm, taking place within TNC´s. ...read more.

However, loans can help countries to expand their economic activities and set up an upward spiral of development if spend wisely. Anyhow, many of the loans that burden the world´s poorest countries were given under dubious circumstances. A tendency concerning loans from developed countries to less developed countries is clearly visible when looking at recent data: In 2007, European and Central Asian countries were lending the most money to developing countries, with an increasing tendency. Special assistance concerning the lending of money is available for the heavily indebted poor countries (HIPC). Those countries are provided with support approach debt reduction. Another financial flow that connects global core areas with peripheral areas are remittances. Remittances sent back to their home nation by migrants represent the largest source of external capital in many developing countries. The World Bank estimated worldwide remittances at $251 billion in 2007. This number represents more than twice the level of international aid provide by the international community. ...read more.

The World Trade Organisation (WTO) exists to promote free trade. It plays a major role in the connection of the global core areas with peripheral areas, as it tries to ease international trade and to decrease the amount of bureaucracy needed. So, the WTO tries to arbitrate trade disputes between developed and less developed countries. The WTO has been successful, as today average tariffs are only a tenth of what they were in the 1990s and before. Also, the world trade has been increasing at a much faster rate. However, in some areas protectionism is still alive and well, for example in areas such as clothing, textiles and agriculture. Although every nation has an equal vote in the WTO, the rich world shuts the poor world out from key negotiations. To conclude this work, it can be said that all covered types of financial flows affect and influence the connection between global core areas and peripheral areas. However, it also can be said that governments, trade blocks and TNC´s are the most important financial flows. ...read more.