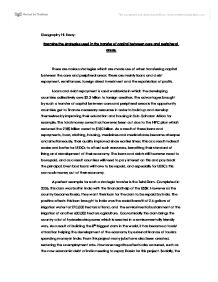 Geography HL Essay: Examine the strategies used in the transfer of capital between core and peripheral areas. There are various strategies which are made use of when transferring capital between the core and peripheral areas. These are mainly loans and debt repayment, remittances, foreign direct investment and the repatriation of profits. Loans and debt repayment is used worldwide in which the developing countries collectively owe $2.3 trillion to foreign creditors. The advantages brought by such a transfer of capital between core and peripheral areas is the opportunity countries get to finance necessary resources in order to build up and develop themselves by improving their education and housing in Sub-Saharan Africa for example. The total money owed has however been cut due to the HIPC plan which reduced the 218$ billion owed to $180 billion. As a result of these loans and repayments, food, clothing, housing, medicines and medical care became cheaper and simultaneously, their quality improved since earlier times. This as a result makes it easier and better for LEDCs to afford such resources, benefiting their standard of living and development of their economy. ...read more.

However negative effects also occurred, such as the now economic debt of India needing to repay Russia for this project. Socially, the d*m required more than 100,000 people to relocate due to the flooding of the area and the safety hazard. These as a result needed to find new jobs and basically start a new life in a new area. The negative environmental effects of this d*m are not only the possible damage of a earthquake in the area which could flood several villages, but also the loss of the fertile agricultural land in the area of the d*m. There is also a chance of landslides occurring due to the deforestation in progress. Remittances are also a strategy which countries use to transfer capital in core and peripheral areas. The best example of such transaction is Mexico and America, in which Mexican workers send remittances back to their origin country when working in the US. This benefits Mexico by reducing poverty due to this source of finance, which makes up a large part of Mexico's GDP. ...read more.

The disadvantages of such a transfer mainly target the UK, as customers of such companies are misled by the Indian employees who should ethically operate in the country of the company itself. r****m is also caused by this cultural disparity, as well as the rise in unemployment in the UK as their jobs are taken away and are relocated to India. Finally, repatriation of profits is used as a transfer strategy between core and peripheral areas. This can include the sale of Irish Guiness beer in a Bavarian pub. This benefits Ireland as the imported goods are bought in Germany, and therefore money is taken from the origin country, leading to a development in the Irish economy. However the country in which the products are sold, in this case Germany, loses money in their economy and therefore reduces their own economic development. Taxes on the money from the products sold are also transferred back to the origin country. In conclusion, there are several ways in which the strategy used in the transfer of capital from core and peripheral areas can benefit but also have negative effects on countries in both a developed and less developed economic position. ...read more.

In places a very strong essay, however a couple of points let it down. The introduction and conclusion are very brief, missing out some key aspects. Generally however, a very good attempt to answer the question posed using appropriate, and in most cases detailed, case studies.
4 stars