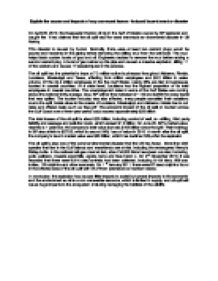 Explain the causes and impacts of any one recent human-induced hazard event or disaster On April 20, 2010, the Deepwater Horizon oil rig in the Gulf of Mexico owned by BP exploded and caught fire. It has claimed that the oil spill was the worst manmade environmental disaster in US history. This disaster is caused by human. Normally, there were at least two cement plugs would be poured and hardened in the piping before removing the drilling mud from the well bore. The mud helps block sudden bursts of gas and oil. Engineers decided to remove the mud before adding a second cement plug. ...read more.

The unemployment rates in some of the Gulf States are running above the national 9.9% average. Also, BP will be fined between $1100 and $4300 for every barrel that was spilled. The tourism industry was also affected, many people cancelled their vacations due to the spill, hotels close to the coasts of Louisiana, Mississippi, and Alabama. Hotels has to cut rates and offered deals such as free golf. The economic impact of the oil spill on tourism across the Gulf Coast over a three-year period could exceed approximately $23 billion. The total losses of the oil spill is about $30 billion, including control of well, re-drilling, third party liability and seepage and pollution costs, which exceed $1.2 billion. ...read more.

In the national refuges most at risk, about 34,000 birds have been counted, including gulls, pelicans, roseate spoonbills, egrets, terns and blue herons. On 2nd November 2010, it was recorded that there were 6,814 dead animals had been collected, including 6,104 birds, 609 sea turtles, 100 dolphins and other mammals. On 1st January 2011, there were 67 dead dolphins found in the affected area of the oil spill with 35 of them premature or newborn calves. In conclusion, the explosion has caused little impacts to social but severe impacts to the economic and the environment as oil is a non-renewable resource, which is limited in supply, and oil spill will cause huge impacts to the ecosystem, including damaging the habitats of the wildlife. ...read more.