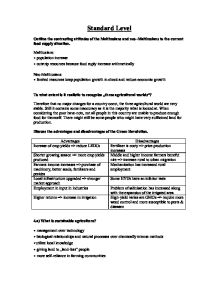 Standard Level Outline the contrasting attitudes of the Malthusians and neo-Malthusians to the current food supply situation. Malthusians: � population increase � outstrip resources because food suply increase arithmetically Neo-Malthusians: � limited resources keep population growth in check and reduce economic growth To what extent is it realistic to recognise "three agricultural worlds"? Therefore that no major changes for a country occur, the three agricultural world are very stable. Still it contains some inaccuracy as it is the majority what is looked at. When considering the poor have-nots, not all people in this country are unable to produce enough food for themself. There might still be some people who might have very sufficined land for production. Discuss the advantages and disadvantages of the Green Revolution. Advantages Disadvantages Increase of crop yields => reduce LEDCs Fertiliser is costy => price production increases Shorter growing season => more crop yields produced Middle and higher income farmers benefut nire => increase rural to urban migration Farmers income increases => purchase of machinery, better seeds, fertilisers and pesides Mechanisation has increased rural employment Local infrastructure upgraded => stronger market approach Some HYUs have an inferior taste Employment in input in industries Problem of salinisation has increased along with the expansion of the irrigated area Higher returns => increase in irrigation High-yield varies are GMOs => require more weed control and more susceptible to pests & diseases 4.a) What is sustainable agriculture? ...read more.

b.) Describe how the main types of mechanical weathering in deserts take place in relation to both climate and rock type. Four main types: Granular disintegration (granite) - grain rocks break down into grains of sand Block separation (sandstone) - well-joined sedimentary rocks break down along their joints and bedding planes which are their main lines of weakness Shattering ( basalt) - rocks which have neiter coars grains nor a blocky structure may shatter into irregular fragments with shark edges Exfoliation (sandstone; granite) - surface of any rock is more exposed to temperature change than the underlying srata; peel off in layers Frost shattering - water which is trapped in cracks in the rocks will freeze and expand, then thaw and contract => leads to fragmentation Wetting and drying - soft rocks absorb water, expand, dry out, and contract => continuous expansion and contraction cause fragmentation c.) Explain why water action can be regarded as more important than wind action in certain desert areas. 4.a) Account for the wide variety of sand dune types to be found in desert areas. Sketch diagrams will be useful to illustrate your answer. Zibar - formed transverse ridges up to a few metres high, which often have their movement impeded by clumbs of vegetation Parabolic - slow moving as their wind ward "horns" are often partly anchored by vegetation Nebkha - dunes form on the lee side of vegetation Dome - simple accumulations of sand a few metres height Transverse dunes - can reach several hundred metres in height; Barchas - ...read more.

In 50% of 16 countries, the proportion of female-headed households increased, and in 50% of the countries the proportion decreased. Orphanhood under the age of 15 years was low in most countries, but higher in sub-Saharan Africa and the Caribbean. It was high in countries with high AIDS death rates. The same patterns applied to fostering. Most countries with the lowest levels of educational attainment had a Muslim majority. More women than men had no schooling in all regions. Sub-Saharan African countries had the lowest standard of living scores. (d) With reference to specific examples, evaluate how effective trade (or food aid) has been in solving poverty and malnutrition. � has increased the dependence of developing countries on food imports � farmers from developing countries have to produce at competitive prices � food aid is inefficient--it often fails to reach the most needy and has high administrative costs � trying control the world � say " money values should rule over life values" � global constitution � most un-democratic organizations � instrument to contronl the world � agreement on agriculture - developing countries are unable to produce own food � no (or low) subsidies - cause countries don't have the money � products produced in developing countries are dumped � food from other countries is much cheaper than cost of production because of subsidies � => unequal competition � farmers are put out of business � not a organisation to promote free trade, it's an agreement to consolidate and hold on on monopoly ...read more.