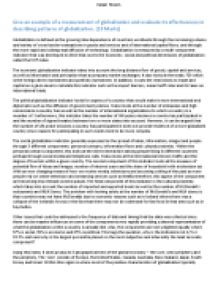 ﻿Kalain Hosein Give an example of a measurement of globalization and evaluate its effectiveness in describing patterns of globalization. [10 Marks] Globalization is defined as the growing interdependence of countries worldwide through the increasing volume and variety of cross-border transactions in goods and services and of international capital flows, and through the more rapid and widespread diffusion of technology. Globalisation is measured by a multi-component indicator that was developed in 2002 that covers the economic, social and political dimensions of globalization called the KOF index. The economic globalization indicator takes into account the long distance flow of goods, capital and services, as well as information and perception that accompany market exchanges. It also looks at the trade, FDI which is the foreign direct investment and portfolio investment. In addition, it uses the restrictions to trade and capital on a given area to calculate this indicator such as the import barriers, mean tariff rates and its taxes on international trade. ...read more.

Within the personal contact component, this looks at the direct interaction among people living in different countries perhaps through social media and telephone calls. It also looks at the international telecom traffic and the degree of tourism within a given country. The second component of this indicator looks at the measure of potential flow of ideas and images, number of internet users and the share of household with a television set. With an ever changing means of how we receive media, televisions are becoming a thing of the past as more people rely on online television and streaming services such as Netflix therefore, this aspect of the component are becoming less relevant as time passes. The final component of this indicator is the cultural proximity which takes into account the number of imported and exported books as well as the number of McDonald?s restaurants and IKEA Stores. ...read more.

The 'core' consists of Europe, the United States, Canada, Australia, New Zealand, Japan, South Korea, and Israel. Within this region is where most of the positive characteristics of globalization typically occur: transnational links, modern development (i.e. higher wages, access to healthcare, adequate food/water/shelter), scientific innovation, and increasing economic prosperity. These countries also tend to be highly industrialized and have a rapidly-growing service (tertiary) sector. The top twenty countries ranked by the United Nations Human Development Index are all in the core. The semi periphery consists HIC?s and MIC?s such as Malaysia, Mexico, and South Africa. These tend to be resource exporting countries, newly industrialized countries and poorer European countries. Some of these countries could now be seen as part of the CORE (South Korea) others are characterized by regional disparities and social polarisation (Brazil) others with very rapid economic growth (Slovakia, China). The periphery tends to be LIC?s which are mainly Africa. This is due to small domestic markets, a lack of infrastructure, population increase, low economic output, low levels of economic diversification and a high agricultural population. ...read more.