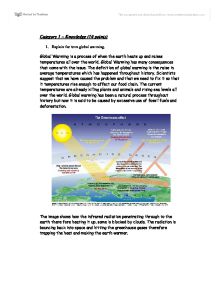 Global Warming, the problem, the potential impacts and alternatives to fossil fuels.

Category 1 - Knowledge (10 points) 1. Explain the term global warming. Global Warming is a process of when the earth heats up and raises temperatures all over the world. Global Warming has many consequences that come with the issue. The definition of global warming is the raise in average temperatures which has happened throughout history. Scientists suggest that we have caused the problem and that we need to fix it so that it temperatures rise enough to affect our food chain. The current temperatures are already killing plants and animals and rising sea levels all over the world. Global warming has been a natural process throughout history but now it is said to be caused by excessive use of fossil fuels and deforestation. The image shows how the infrared radiation penetrating through to the earth there fore heating it up, some is blocked by clouds. The radiation is bouncing back into space and hitting the greenhouse gases therefore trapping the heat and making the earth warmer. 7. What will cause sea levels to rise? As world temperatures rise so do the sea levels, rising sea levels can cause a great deal of problems. Global warming is a major factor in sea levels increasing; this is because of the melting of polar ice caps. The polar ice caps contain 2.4% of the world's surface water; if this all melts the consequences are tremendous. The consequences of the polar ice caps melting including; mass population evacuation, the inundation of water in low lying areas and will affect the food quality and sustainability. ...read more.

Ocean power or wave energy uses the movement of the waves in rough conditions and areas in the sea to absorb the movement through large machines. This has been recently tested in Portugal where the seas are known to be calm; the energy off these machines goes into the Portugal power grid. Solar energy is made by extracting energy from the sun by heating up water from the infrared radiation coming from the suns rays. Using the sun for our energy requirements is a very good idea and takes from the sun what is free. Hydroelectricity is an extremely clean source for our energy requirements. Hydroelectricity is made by a making a d*m and from the top of the d*m the water is pushed through a gap in the d*m wall which spins a turbine. From there the energy is goes through a generator and then the energy is transferred from there into the power grid. For our cars we can use ethanol it is a biofuel and is derived from sugar cane or corn. Using this in our cars is not as bad as using Crude Oil as it emits substantially less carbon dioxide than oil. The downsides to these energy alternatives is that most of them are very expensive to set up, some might take up too much space. The positives can speak them selves and they include; Low/No Pollution, benefits environment and sustainable for the future. Category 3 - Applying your understanding (15 points) ...read more.

This graph goes against what the others show although this might not be as accurate as the others. All of these readings, findings and reports have been compiled together and gives us the graph. Category 5 - Being creative with your knowledge (25 points) 3. Write a letter to the federal Government outlining your concerns for the future of our country. Category 6 - Weighing up the evidence: Critical thinking (30 points) 1. If earth has warmed and cooled throughout history, what makes scientists think that humans are causing global warming now? Throughout history the earth has gone through many stages and periods to end up where it is today. The changes in temperature of those years are very important as they can affect the temperatures in our world today. Scientists believe that the human race is causing climate change because of the rapid increase in temperatures in the mid to early 1900's. The temperatures quickly crept up as we were using more fossil fuels and the introduction of harsh chemicals to deplete the ozone layer. The ozone layer blocks out harsh UV rays which can increase land temperature dramatically. With the greenhouse effect growing the world had increased temperatures which had not been expected at this time. Scientists think global warming is happening now as the rapid increase is on par with increased use of fossil fuels and the pollution of the atmosphere. Climate change is a very realistic event in the 21st century and it effects all of us so we need to change that by reversing the process and reducing the use of fossil fuels and other air pollutants. ...read more.