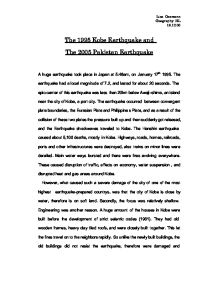 The 1995 Kobe Earthquake and The 2005 Pakistan Earthquake A huge earthquake took place in Japan at 5:46am, on January 17th 1995. The earthquake had a local magnitude of 7.2, and lasted for about 20 seconds. The epic-center of this earthquake was less than 20km below Awaji-shima, an island near the city of Kobe, a port city. The earthquake occurred between convergent plate boundaries, the Eurasian Plate and Philippines Plate, and as a result of the collision of these two plates the pressure built up and then suddenly got released, and the Earthquake shockwaves traveled to Kobe. The Hanshin earthquake caused about 5,100 deaths, mostly in Kobe. Highways, roads, homes, railroads, ports and other infrastructures were destroyed, also trains on minor lines were derailed. ...read more.

Reacting to the fires was hindered by the failure of the water supply system and the disruption of the traffic system. Another cause for a particularly devastating effect was that no clear actions were prepared and the careful Japanese government gave a slow response, causing aids and supports to be late. Ten years later another great earthquake happend in Pakistan, at 8:50am, on October 8th 2005. The magnitude of 7.6 killed about 30,000 people and left 42,000 injured. The earthquake occurred as a result of the convergent plate boundaries colliding, the Indian sub-continent and the Eurasia plate. The focus of the quake was located in northern Pakistan, near Islamabad. Damages occurred mainly throughout Kashmir, leaving two million people homeless. Even though the magnitude of the Kashmir earthquake was comparatively similar, the damage was far greater than the Kobe earthquake in Japan. ...read more.

The Kobe earthquake could have been more devastating if it had been a few hours later because then the citizens would have been outside of their homes, where anything could have collapse on top of their heads. The Kashmir earthquake was unlucky in this point; however, the period of year in this disaster was more fortunate than the one in Kobe. Kobe was in the middle of winter when the earthquake happend. People who lost their homes had to survive a freezing winter, as in Kashmir the temperature was rather warm. The measurment of the magnitude on the Richter Scale does not show the complete damage of an Earthquake. From these factors, it is obvious that weather, time, preparation, engineering and the state and postion of government are several affects that have influence on how devestating the damage of an earthquake is. Lisa Ossmann Geography HL 19.12.06 ...read more.

A very good summary of the impacts of the Kobe and Pakistan earthquakes, with some attempt to compare them.
4 stars