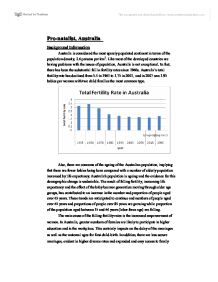 Pro-natalist, Australia Background Information Australia is considered the most sparely populated continent in terms of the population density, 2.6 persons per km2. Like most of the developed countries are having problems with the issues of population, Australia is not exceptional. In fact, there has been the substantial fall in fertility rates since 1960s. Australia's total fertility rate has declined from 3.5 in 1961 to 1.73 in 2001, and in 2007 was 1.93 babies per woman with two child families the most common type. Also, there are concerns of the ageing of the Australian population, implying that there are fewer babies being born compared with a number of elderly population increased by life expectancy. Australia's population is ageing and the evidence for this demographic change is undeniable. The result of falling fertility, increasing life expectancy and the effect of the baby boomer generation moving through older age groups, has contributed to an increase in the number and proportion of people aged over 65 years. These trends are anticipated to continue and numbers of people aged over 65 years and proportions of people over 85 years are growing while proportion of the population aged between 15 and 64 years (labor force age) ...read more.

Also, the government is committed to improving maternity services through the national maternity services plan. The government's Economic Security Strategy is delivering financial relief to families of up to $1,000 for each dependent child in 2 million families. Furthermore, the government spends $3.2 billion each year to assist families with the cost of child care. The government allocated $1.6 billion over four years to reduce the burden of child care costs by increasing the child care tax rebate from 30% to 50% of out of pocket expenses and increasing the maximum amount of payment from $4354 to $7500 indexed per child per year. Evaluation of the population policy Even though the Australian governments have allocated its budget to encourage married couples to have babies, the fertility rates are likely to stagnate between 1.6 and 1.7, meaning that the population policy has failed to achieve the main objective attempted to make the fertility rate near replacement fertility rates, 2.1 births per woman. As mentioned earlier, the actual and perceived costs of raising children in Australia still remain high that people cannot afford and this is thought to be a main reason that fertility rates are not increasing. ...read more.

However, The Australian government believes the immigrants from various nations are the key to keep the Australian population young. Since there are greater number of ageing of population and less number of young people, immigrants are considered economic assets and they also contribute a significant economic growth to Australian economy. Despite the fact the immigrants are working labors, the Australia government have attempts to cut the number of immigrants as it has realized that many immigrants are occupied the workplace that indigenous Australians are likely to have less opportunities to get jobs. Furthermore, the government has tried to deal with the ageing of population at the same time, attempting to increase the fertility rates. In response to the ageing problems, the Australian Government has provided leadership by developing the National Strategy for an Ageing Australia which provides a framework for responding to the opportunities and challenges of population ageing. Also, local government, in partnership with the Australian Government, is well positioned to have a positive and crucial impact on the growing older population through its 1) intimate knowledge of the local community and identification of the diversity of older people planning and 2) provision of services and programs that are flexible and locally appropriate to the needs of older people. ...read more.

A very good review of the pro-natalist population policy in Australia. It would benefit from greater use of data in places, but otherwise successfully reviews the policy that is in place.