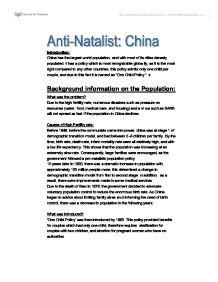 Introduction: China has the largest world population, and with most of its cities densely populated. It has a policy which is most recognizable globally, as it is the most rigid compared to any other countries, this policy admits only one child per couple, and due to this fact it is named as "One Child Policy." s Background information on the Population: What was the problem? Due to the high fertility rate, numerous disasters such as pressure on resources (water, food, medical care, and housing) and a virus such as SARS will not spread as fast if the population in China declines. Causes of High Fertility rate: Before 1949, before the communists came into power, china was at stage 1 of demographic transition model, and had between 5-8 children per family. By the time, birth rate, death rate, infant mortality rate were all relatively high, and with a low life expectancy. This shows that the population was increasing at an extremely slow rate. Consequently, large families were encouraged, as the government followed a pro-natalistic population policy. 10 years later in 1960, there was a dramatic increase in population with approximately 100 million people more; this determined a change in demographic transition model from first to second stage. In addition, as a result, there were improvements made in some medical services. ...read more.

Exceptions considered by the government: Some exceptions are applied to Families living in rural areas, which may have two children since these children will be part of the farming work force. Also, another exception was applied in 1995 to couples which are single child, if any couple has this characteristic they may have a second child. The Chinese government also take into account that, If the first child who is born is unable to work because of mental or physical problems, the couple is able to have a second child. Moreover, In the rural areas, couples with real difficulties economically may have a second child as well. Evaluating The policy: Achievement in Goals: The results of the policy have been successful. The rate of birth rate has plummeted from 6 to 1.8. And the Risk of epidemics, slums, overwhelmed social services and strain on the ecosystem has been avoided. Negative consequences: There also have been consequences in the policy. In 1983, family planning work teams carried out 21 million sterilizations, 18 IUD insertions, and 14 million abortions. There were concerns about children who were born and grew up without brothers or sisters, where becoming spoiled and selfish, since they never experienced the chance of having brothers or sisters and share different things with them. ...read more.

Many lower classes females in China have no choice, and become pregnant by accident, and the consequences of this is to have abortion with unwillingness. On ther other hand, some women will go and hide to have their child away from the Chinese government, and this is when matters start to become serious. Moreover, Basic Human rights are violated, and atrocities such as forced abortion, female infanticide, abandonment, s*x-selective abortions and forced sterilization occur. On a moral aspect of the situation, it shows that these things are morally and brutally wrong. Therefore, despite the fact that it is causing immorality, the need to reducing the population is inevitable. Positive Consequences: Despite the fact this policies has created many issues, there are some benefits from this Policy. Children in urban areas are benefiting from the one child policy; with no sibling competition they have a better education, a greater amount of attention. The parents have very high expectation for their children and therefore encouraging them to excel in school and in extracurricular activities. But this increased pressure on the children has caused some to commit suicide. Children in rural areas benefit as well, the policy has permitted children to go to school and receive a good education. The fertility rate has helped reduce the population size, therefore avoiding or reducing certain sever problems, epidemics, slums, overwhelmed social services and strain on the ecosystem. ?? ?? ?? ?? ...read more.

A good review of the Chinese One Child policy which recognises both positives and negatives associated with it over time. To improve, more data is required in the initial parts of the review.