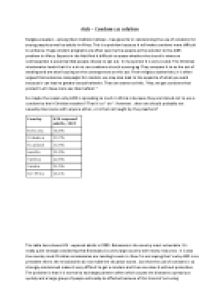 Religious leaders - among them Catholic bishops - has gone far in condemning the use of condoms for young people as well as adults in Africa.

﻿Aids ? Condoms as solution Religious leaders - among them Catholic bishops - has gone far in condemning the use of condoms for young people as well as adults in Africa. This is a problem because it will make condoms more difficult to enhance. Huge condom programs are often seen by the people as the solution to the AIDS problem in Africa. Experts in the field find it difficult to assess whether the church's views on contraception is essential that people choose to opt out. ...read more.

The problem is that it is normal to exchange partners often which causes the disease to spread out quickly and a large group of people will easily be affected because of this trend of not using condoms. So the conclusion is that unprotected s*x is a major cause of the spread of AIDS. What could be the prevention of the spread? Condoms are one thing, and also that you become better informed about the disease . Those who live in Africa, especially in rural areas and among poor people know very little about the disease and it also means that they do not see the danger in not using condoms. ...read more.