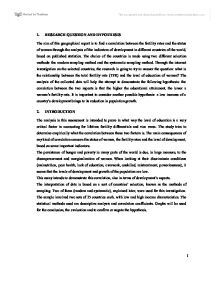 The aim of this geographical report is to find a correlation between the fertility rates and the status of women through the analysis of the indicators of development in different countries of the world, based on published statistics.

1. RESEARCH QUESTION AND HYPOTHESIS The aim of this geographical report is to find a correlation between the fertility rates and the status of women through the analysis of the indicators of development in different countries of the world, based on published statistics. The choice of the countries is made using two different selection methods: the random sampling method and the systematic sampling method. Through the internet investigation on the selected countries, the research is going to try to answer the question: what is the relationship between the total fertility rate (TFR) and the level of education of women? The analysis of the collected data will help the attempt to demonstrate the following hypothesis: the correlation between the two aspects is that the higher the educational attainment, the lower a woman's fertility rate. It is important to consider another possible hypothesis: a low increase of a country's development brings to its reduction in population growth. 2. INTRODUCTION The analysis in this assessment is intended to prove in what way the level of education is a very critical factor in accounting for lifetime fertility differentials and vice versa. The study tries to determine empirically what the correlation between these two factors is. The main consequences of any kind of correlation concern the status of women, the fertility rates and the level of development, based on some important indicators. The persistence of hunger and poverty in many parts of the world is due, in large measure, to the disempowerment and marginalization of women. ...read more.

According to the data, those countries facing less development levels in 1990 had their secondary school enrolment for females below 59 and their TFR values above 4.0; the lowest value was found Yemen(21) with 6.2 value for the TFR. The highest value for literacy levels reaches 136 (Dominican Republic), which is the outlier. 6. CONCLUSION The study has an attempt to underline the correlation between the important aspects of total fertility rate and the level of education of women in different countries. It has deeply studied and analysed the different statistical methods used the techniques that helped seeing the correlation. The hypothesis has been demonstrated and confirmed through the data collected: the higher the literacy levels the lower the TFR. It has been noted how these two features can affect a country's development and its growing in terms of population. But it is difficult to determine direct causation. Some data may be merely caused by different societies, backgrounds and life styles. An example can be demonstrated by the Eastern countries, where their culture does not allow women to live in a facilitated status like men. Overall, it seems that the correlation is moderately negative. The analysis could have been more accurate if more countries were taken in examination, so that more data were available and the results could have been stronger. A deepest investigation on the development of the countries could also be an option for a precise outcome. INDEX 1. RESEARCH QUESTION AND HYPOTHESIS p. 1 2. INTRODUCTION p. 1-3 3. METHODS AND DATA SELECTION p. 3-4 4. PRESENTATION OF RESULTS p. 4-9 5. INTERPRETATION AND ANALYSIS p. 9 6. CONCLUSION p. 10 BIBLIOGRAPHY p. ...read more.