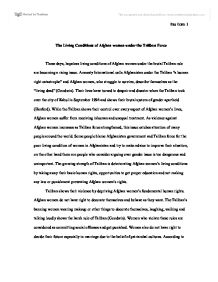 The Living Conditions of Afghan women under the Taliban Force

The Living Conditions of Afghan women under the Taliban Force These days, hopeless living conditions of Afghan women under the brutal Taliban rule are becoming a rising issue. Amnesty International calls Afghanistan under the Taliban "a human right catastrophe" and Afghan women, who struggle to survive, describe themselves as the "living dead" (Goodwin). Their lives have turned to despair and disaster when the Taliban took over the city of Kabul in September 1996 and shows their brutal system of gender apartheid (Hanford). While the Taliban shows their control over every aspect of Afghan women's lives, Afghan women suffer from receiving inhuman and unequal treatment. As violence against Afghan women increases as Taliban force strengthened, this issue catches attention of many people around the world. Some people blame Afghanistan government and Taliban force for the poor living condition of women in Afghanistan and try to make advice to improve their situation, on the other hand there are people who consider arguing over gender issue is too dangerous and unimportant. The growing strength of Taliban is deteriorating Afghan women's living conditions by taking away their basic human rights, opportunities to get proper education and not making any law or punishment preventing Afghan women's rights. ...read more.

Many young women in Pakistan have been prevented from going to school by Taliban forces (Khan). Aside from getting education, Women are also treated unequally as in job opportunities compared to men. Because of unequal job opportunities, female teachers and doctors are rare in Afghanistan. The major leading cause of death of Afghan women is impossibility of getting proper first-aid when they needed because of lack of female doctors in society (Hosseini). Moreover, High mortality and diseases of women has brought into focus the lack of education. Restrictions of education for women leads to health awareness that female students who did not get proper education on nutrition and health issues of women's lives tend to have high mortality and life threatening diseases (Emadi). Improper education and unequal job opportunities which cause the lack of female doctors and teachers in Afghan society leads to high mortality and diseases of Afghan women. The Afghan government does little to deal with the situations of violence against women. Afghan women's living condition gets worse not only because of the Taliban, but also the Afghan Government who, in reality, promotes the growing strength of the Taliban by just watching and doing nothing on violent rule of the Taliban over its country. ...read more.

get proper education and the Afghan Government who fears the power of the Taliban and not making any law or punishment preventing Afghan women's rights. The Taliban deprives almost every fundamental right of women which makes women struggle to survive. Also, their harsh restrictions especially banning women's education leads to high mortality and diseases of women. Despite of all these violence against women, in reality, the Afghan Government is corrupted and insensible that they do not do much to improve or deal with the situation. Some people argues that it is just a problem of Afghanistan and not a problem that whole world needs to worry about, but it is important for people around the world to aware of this situation of violence against women in Afghanistan. Avoiding it and Trying not to face it because it's a gender issue of a country with minor popularity is an old thinking. Poor living conditions of Afghan women can be improved not only to remove the Taliban force which now controls many aspects of Afghan people's lives, but also to eliminate factors that causes the growing strength of the Taliban in Afghan society. ?? ?? ?? ?? Itsu Karo 1 ...read more.