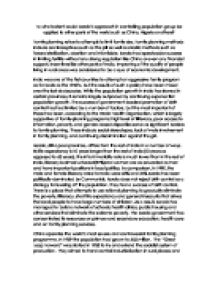 To what extent could Keralas approach in controlling population group be applied to other parts of the world such as China, Nigeria or others?

To what extent could Kerala's approach in controlling population group be applied to other parts of the world such as China, Nigeria or others? Family planning refers to attempts to limit family size. Family planning methods include contraceptives such as the pill as well as drastic methods such as forced sterilization, abortion and infanticide. Kerala had spectacular success in limiting fertility without any strong regulation like China or even any financial support, incentives like other parts of India. Improving of the quality of people living in rural areas was considered to be a que of economic development. India was one of the first countries to attempt an aggressive family program as far back as the 1950's, but the results of such a policy have been mixed over the last six decades. While the population growth in India has slowed in certain provinces, it remains largely outpaced by continuing exponential population growth. The success of government-backed promotion of birth control has had limited by a number of factors, but the most important of these has been, according to the World Health Organization, which ...read more.

They aimed to hand control industrialization in rural places and set high targets for agriculture. This ended with disorganized production and famine, causing the population to drop by 14 million between 1959 and 1962. Infant mortality reached around 284 per 1000, compared to 38 per 1000 in the late 1990's. The one-child policy was established to limit China's population growth. It limits couples to one child. Fines, pressures to abort a pregnancy, and even forced sterilization accompanied second or subsequent pregnancies. Since the introduction of the one-child policy in 1979, there has been no large drop in fertility and in fact China experienced a slight increase fluctuating around 21 births per 1,000 people in the 1980s. It is connected with fact that women have no say in determining the size of the family and boys are more wanted due to an investment as they provide old-age security for their parents. On the other hand, Kerala has been successful in raising female literacy. It happened because of mass education, high proportion of Christian where women are likely to get married later and care about their carrier and also high population density. ...read more.

Besides, half of population are Muslim and their religion encourages them to have as many children as they can. There are three three main reasons why they were not successful. Firstly, only about 6% of married women currently use a method of contraception. Secondly, high TFR is a result of early age of marriage and childbearing. Thirdly, their tradition and culture encourages them to have many children. In Kerala fertility declines not only at the same time as knowledge about contraceptives was spreading faster but also it raised female literacy. Kerala is a Christian country in contrast of Nigeria. The population policies of China and India, in particular of Kerala state, show very different approaches to the need to limit rapid population growth. The position of women in Kerala provides a model which should be copied elsewhere. They enjoyed economic freedom and independence. Kerala police has a reputation. Other countries cannot reproduce the historical experience of Kerala's attitude to women. David Waugh ;Geography: An Integrated Approach,4th edition Garrett Nagle, Briony Cooke; Geography for the IB diploma, IB study guides www.worldbank.org/data&statistics http://en.wikipedia.org ?? ?? ?? ?? ...read more.