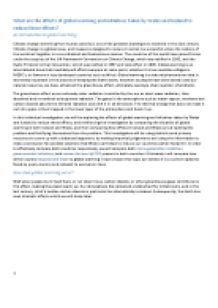 What are the effects of global warming and initiatives taken by Wales and Iceland to reduce these effects?

Transfer-Encoding: chunked ﻿What are the effects of global warming and initiatives taken by Wales and Iceland to reduce these effects? An introduction to global warming Climate change stemming from human activity is one of the greatest challenges to mankind in the 21st century. Climate change is a global issue, and measures designed to reduce it cannot be successful unless the nations of the world act together in a co-ordinated and harmonious manner. The countries of the world have joined forces under the auspices of the UN Framework Convention on Climate Change, which was ratified in 1992, and the Kyoto Protocol to that Convention, which was ratified in 1997 and took effect in 2005. Global warming is an international issue that inevitably will affect everyone at some point, whether it is low coastline villages in MEDC?s, or farmers in less developed countries such as Africa. Global warming is a natural phenomenon that is extremely important in the process of keeping the Earth warm; however as people have dismissively used our natural resources, we have enhanced the greenhouse effect, ultimately causing a chain reaction of problems. The greenhouse effect occurs whereby solar radiation is emitted by the sun as short wave radiation, then absorbed and re-emitted as long wave radiation. The gases in the atmosphere such as water vapour, methane and carbon dioxide absorb the infrared radiation and emit it in all directions. The thermal energy that does not make it out into space is then trapped in the lower layer of the atmosphere and heats it up. In this individual investigation, we will be exploring the effects of global warming and initiatives taken by Wales and Iceland to reduce these effects, and reinforcing the investigation by comparing the situation of global ...read more.

letsrecycle.com Percentages of recycling in Iceland is very low compared to Wales at about 26% in 2006, which was at its highest. Since then it has fluctuated, and been around 16% in some years. So what have both countries done to reduce landfill waste? Wales has begun to impose higher landfill taxes in order to discourage throwing away household waste and more environmentally friendly waste management techniques such as recycling. Local authorities have been encouraged by the government to increase the provision of free recycling bins, etc… to ease the process and reduce the hassle of recycling. Iceland on the other hand have difficulties with recycling their waste because of their climate conditions making recycling particularly costly. Instead initiatives have been set up to cut down the amount of waste through reducing packaging of items e.g. in shops by at least 50% by 2025. 1. Renewable Energy Renewable energy reduces the amount of polluting gases in the atmosphere producing cleaner energy through harnessing solar energy, wind energy etc… Renewable energy is a fundamental way to reduce our carbon footprint and has been invested heavily in both Wales and Iceland. In fact, Iceland is 100% renewable through harnessing geothermal, and hydroelectric power. reneweconomy.com.au C:\Users\User\Downloads\unnamed.jpg Iceland's unique geology allows it to produce renewable energy relatively cheaply, from a variety of sources. Iceland is located on the Mid-Atlantic Ridge, which makes it one of the most tectonically active places in the world. There are over 200 volcanoes located in Iceland and over 600 hot springs. There are over 20 high-temperature steam fields that are at least 150 °C; many of them reach temperatures of 250 °C. ...read more.

Emissions graph Chrisbeales.net The graph shows we have exceeded our target to reduce our emissions to reach the demands of the bound Kyoto Protocol agreement. The UK has been involved in innumerable strategies to overstep the targets set including: â¼ Reducing demand for energy with smart meters and other energy-efficient measures for industry, businesses and the public sector. â¼ Reducing emissions by improving the energy efficiency of properties through the Green Deal. â¼ Providing incentives for public and private sector organisations to take up more energy-efficient technologies and practices through the CRC Energy Efficiency Scheme. â¼ Reducing greenhouse gases and other emissions from transport. Iceland, because of its well-regulated carbon emissions and initiatives, is authorised to produce 10% more carbon emissions of its 1990 baseline, but set target to reduce 50-75% of its emissions by the deadline 2050. As of 2012 Iceland was on target. Global warming survey – Master copy 1. How much have you learned about climate change? What do you believe about it? 2. How much does the topic concern you in general? Why? 3. What do you know about both the short-term and long-term consequences of climate change? 4. What steps can individuals take to help reduce the effects of climate change worldwide? Table of Contents An introduction to global warming 1 How does global warming occur? 1 What are the effects of global warming on an international scale? 1 People’s outtake on global warming2 Analysis of results 2 How do humans increase the effect of global warming? 2 How can people reduce the greenhouse effect on a personal level? 2 So what have both countries done to reduce landfill waste? 3 A comparison between Iceland & Wales4 Evaluation & conclusion of this investigation 4 Global warming survey – Mater copy 5 ...read more.