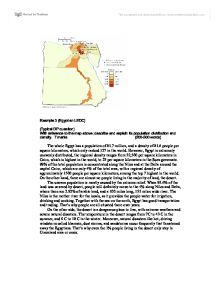 With reference to the map above; describe and explain its population distribution and density

The Niles is the mother river for the locals, as it provides the people water for irrigation, drinking and cooking. Together with the sea on the north, Egypt has good transportation and trading. That's why people are all situated there over years. On the other side, the desert is a dangerous place to live, with extreme weathers and severe natural disasters. The temperature in the desert ranges from 7C to 43 C in the summer, and 0 C to 18 C in the winter. Moreover, natural disasters like hot, driving windstorm called khamsin, dust storms, and sandstorms occur frequently that threatened away the Egyptians. ...read more.

This is when medical care improved, so less people and babies die, but the birth rate is still very high. As a result, the zone of natural increase is huge, and the overall population, which is mostly concentrated along the Niles and capital, increases rapidly. Thus, it caused the uneven distribution to be even more serious in Egypt. In conclusion, Egypt doesn't have a high country density, but its extremely uneven distribution of population due to weather, relief, natural disasters, transportation, and water resources caused the Niles and Delta to be one of the densest regions in the world. Moreover, its long history of civilization and recently expanding made the problem to be more severe. ...read more.