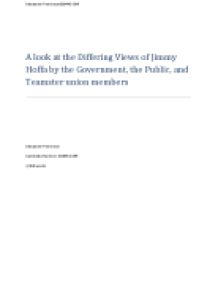 A look at the Differing Views of Jimmy Hoffa by the Government, the Public, and Teamster union members

This ever-increasing power of the Teamsters and Jimmy Hoffa?s power over the Teamsters alarmed the government. On the Jack Parr Show, Robert Kennedy was asked to compare Dave Beck and Hoffa and he responded, Oh, there?s no comparison between them, Hoffa and Mr. Beck. Mr. Beck was just a thief? Mr. Hoffa is a far more serious threat than a Mr. Dave Beck? The Teamsters Union as it is operated now by Mr. Hoffa, because of its control over transportation, is probably the most powerful institution in the United States next to the government.? (Witwer 192) This quote shows that while Hoffa?s questionable union activities caused the government to view him in a negative light; it was the fact that he had such immense power that threatened the government the most. A combination of this power along with his known associations with the criminal underworld only furthered the government?s view of Hoffa as a threat. Senator John McClellan thought it ?unthinkable that the leaders of any such powerful organization should have an alliance or understanding in any area of its activities with racketeers, gangsters, and hoodlums? (Sheridan 68). Hoffa had plenty of these alliances too and the government was well-aware. The McClellan Committee?s Second Interim Report echoes this fear, the committee felt that Hoffa was ruining the labor movement by bringing criminals into the economy. Jimmy Hoffa?s ties with organized crime began during the 1940s, when Hoffa began enlisting the help of various criminals to provide physical strength and power to the Teamsters in their fight against the Congress of Industrial Organizations (Sloane 32). Hoffa?s relationships with criminals and the underworld would continue throughout his life and would be continually questioned by the government. In Tentacles of Power, Clark Mollenhoff believed ?there was no doubt that it was a hoodlum empire.? (54) The McClellan Committee would investigate Hoffa?s relationships with several criminals within the union, such as Johnny Dioguardia, Anthony Corallo, Samuel Goldstein, and Joseph Glimco. ...read more.

(Witwer 225) Jimmy Hoffa was viewed positively by the majority of Teamsters because what he could do for them, but whenever certain members felt they were not getting the hours, wages, and rights they deserved; they opposed Hoffa. ________________ Conclusion As Jimmy Hoffa became more prominent in the International Brotherhood of Teamsters, the labor movement, and the United States as whole, public opinions of Hoffa began to diverge. Jimmy Hoffa was viewed by the government to be evil, corrupt, and too powerful. The government viewed Jimmy Hoffa this way because of his continually growing power, his criminal associations, and his avoidance of the legal system despite the government?s many investigations. Hoffa held great power because of his position within the Teamsters due to the importance of the trucking industry to the whole American economy and the immense benefit funds that it gave him access too. This power combined with the fact the government was well-aware of Hoffa?s criminal associations was seen as a threat by the government and is what led them to perceive Hoffa so negatively. In regard to the public?s opinion of Hoffa, they had similar feelings of dislike for Hoffa. Public opinion was swayed towards the government largely due to the televised hearings between Hoffa and Robert Kennedy, which viewers saw as a battle of good versus evil. The majority of Teamsters viewed Hoffa differently than the government. They supported Hoffa because of his tough personality, the respect and attention he gave to the rank-and-file members, and the good things he did for the Teamsters union. The union members felt they could relate to Hoffa and liked his hands-on approach when it came to organizing compared to that of other leaders, who were simply businessmen or politics. They felt like Hoffa was one of them. Teamster members were aware of the negative claims against Hoffa made by the government, but disregard them because they felt the good outweighed the bad. While some union members disliked Hoffa and made attempts at reform, the vast majority of research showed that most Teamsters had a good view of Hoffa. ...read more.