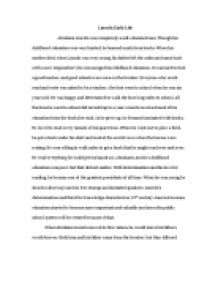 ﻿Lincoln Early Life Abraham Lincoln was completely a self-educated man. Though his childhood education was very limited, he learned much from books. When his mother died, when Lincoln was very young, his father left the cabin and came back with a new stepmother who encouraged his childhood education. It was hard to find a good teacher, and good schools were rare on the frontier. Everyone who could read and write was asked to be a teacher. Abe first went to school when he was six years old. He was happy and determined to walk the four long miles to school. All the time he went to school did not add up to a year. ...read more.

Abraham Lincoln's childhood education was poor, but that did not matter. With determination and his love for reading, he became one of the greatest presidents of all time. When he was young he stood in doorways and on tree stumps and imitated speakers. Lincoln?s determination and thirst for knowledge characterizes 19th century America because education started to become more important and valuable and soon the public school system will be created because of that. When Abraham Lincoln moved to New Salem, he would leave his fathers world forever. Both him and his father came from the frontier, but they differed on their outlooks on life and their aspirations. During Lincoln?s life America was transforming from ?a rural, semisubsistence economy to a new commercial, market-oriented society. ...read more.

In 1803, President Thomas Jefferson purchased the territory of Louisiana from the French government for $15 million. The Louisiana Purchase stretched from the Mississippi River to the Rocky Mountains and from Canada to New Orleans, and it doubled the size of the United States. The expansion of the United States is evident in Lincoln?s childhood by his father?s erotic moving habits. Thomas Lincoln starts in Elizabethtown, Kentucky, where he married Nancy Hanks. By the time Lincoln was seven, in 1816, his father had legal issues in Kentucky and moved the family to Indiana. Then again in 1830, Thomas Lincoln moved the family west, this time to Illinois. Once Lincoln became of age, he decided not move with family once more and decided to have a life of his own in New Salem. ...read more.