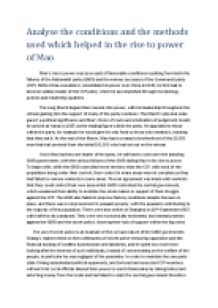 ﻿Analyse the conditions and the methods used which helped in the rise to power of Mao Mao?s rise to power was as a result of favourable conditions resulting from both the failures of the Nationalist party (GMD) and the various successes of the Communist party (CCP). Before Mao was able to consolidate his power over China in 1949, he first had to become solitary leader of the CCP party; which he accomplished through his ideology, policies and leadership qualities. The Long March began Mao?s ascent into power, with his leadership throughout the retreat gaining him the support of many of the party members. The March?s physical scale gave it a political significance and Mao? choice of route and vindication of judgement meant he arrived at Yanan in 1935 as the leading figure within the party. He appealed to those within the party, for example he would give his only food to those who needed it, insisting that they eat it. At the end of the March, Mao had a created a brotherhood of the 20,000 men that had survived from the initial 100,000 who had set out on the retreat. Once Mao had become leader of the party, he still had to overcome the standing GMD government, with the various failures of the GMD aiding Mao in his rise to power. ...read more.

Furthermore, he was a poor judge of character, trusted those he liked too easily and he was more concerned about connections and loyalty not ability. The US took note of his weaknesses. Foreign support was a major asset to the GMD, with the US giving $3 billion in aid to GMD, to combat the CCP forces, as well as arms for WWII under a lend-lease scheme, meaning they had to pay it back with low, or even no interest. They also supplied 55,000 military advisors to GMD. Foreign support came at a cost. However, dependence on foreign support undermined Chiang?s claim to be true defender of the nation?s interests. At the same time his allies grew increasingly critical of his style of government and his personal failings. Failure of the government to deliver on ?nationalism?, ?democracy? and ?people?s livelihood? (the three principles of GMD) saw much of their support, which they attracted in 1920s and 1930s, ebb away. Their failure to defend national interests, had created a doctorial and not a democratic, and had done little to improve the livelihood of the people. Mao?s strength and superior methods allowed to him to exploit the weaknesses of the GMD government. ...read more.

The ultimate trigger in Mao?s rise to power was his victory in the Civil war which lasted from 1946 to 1949. There were five main phases to the campaign, with the first being the struggle for Manchuria, the most industrially advanced region. In 1946 Mao held Manchuria, and he said that ?of we hold Manchuria, our victory will be guaranteed? and events proved him right. The retaining of Manchuria raised questions about Chiang?s leadership. In 1947 Chiang captured Yanan, the CCP base, however they had retreated and it meant that he GMD had overstretched their troops. BY late 1947 the GMD had lost north-eastern China and from then on Mao changed his tactics to a more direct strategy, showing his flexibility as a military leader and commander. From then on Mao attacked individual areas of Manchuria to guarantee a slow but successive stronghold of the region, and on 16 January 1949 the CCP captured Beijing, with the GMD forces surrendering. Mao?s flexibility and nationalistic attitude further allowed him to overcome the provisional GMD government, led by Chiang-Kai Shek, which failed to defend national interests. With his idea of democratic centralism and a peasant revolution, Mao drew in support from the majority of the population, undermining the GMD forced. Success in the Civil war finally allowed him to have complete control of China. ...read more.