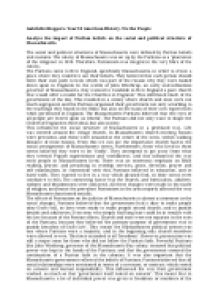 Analyse the impact of Puritan beliefs on the social and political structure of Massachusetts.

﻿Gabrielle Kloppers- Year 10 American History- We the People Analyse the impact of Puritan beliefs on the social and political structure of Massachusetts. The social and political structures of Massachusetts were defined by Puritan beliefs and customs. The colony of Massachusetts was set up by the Puritans as a ?plantation of the religious? in 1630. Therefore, Puritanism was integral in the very fibre of the colony. The Puritans came to New England, specifically Massachusetts, in order to create a place where they could live out their beliefs. They believed that each person should form their own path to God, which was part of the reason why they were looked down upon in England. In the words of John Winthrop, an early and influential governor of Massachusetts, they wanted to ?establish in New England a pure church that would offer a model for the Churches in England.? This infiltrated much of the government of the day. ...read more.

Furthermore, those who lived in these towns believed they were to be ?Godly?. They attempted to get away from what they termed ?Popish superstitions and worldliness?, and this influenced the way most people in Massachusetts lived. There was an enormous emphasis on Bible reading, prayer, and preaching in worship services, grace, devotion, prayer and self examination. In connection with this, Puritans believed in education, and in hard work. They wanted to live in a way which pleased God, so their towns were conducive to this. The connecting factor was the church, and fornication, adultery, sodomy and drunkenness were outlawed. All these changes were made in the name of religion, and hence the prevalent Puritanism in the area majorly affected the way Massachusetts functioned socially. The effects of Puritanism on the politics of Massachusetts is almost as immense as the social changes. ...read more.

Puritans believed that all social relationships were envisioned in terms of a covenant, or contract, which rested on consent and mutual responsibility. This influenced the way their government worked, so much so that ?government itself rested on consent?. This meant that in Massachusetts, a lot of individual power was given to freedmen or members of the Church, as well as smaller towns within the whole of Massachusetts, although there was also a governor and legislative assembly which made the most important decisions. This principle of consent led to a great emphasis on a ?limited? or ?constitutional monarchy? within the colony of Massachusetts, and also gave rise to the development of modern American democratic principles. Hence, the political structure of colonial Massachusetts was very distinct, rising from the Puritanism which was prevalent among its founders. Ultimately, the social and political structure of Massachusetts was largely formed as a result of its Puritan founding fathers, and this influenced the government of the colony. ...read more.