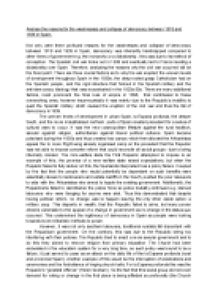 Analyse the reasons for the weaknesses and collapse of democracy between 1918 and 1939 in Spain.

Transfer-Encoding: chunked ﻿Analyse the reasons for the weaknesses and collapse of democracy between 1918 and 1939 in Spain. Not only were there profound reasons for the weaknesses and collapse of democracy between 1918 and 1939 in Spain, democracy was inherently handicapped compared to other forms of government e.g. the monarchy or a dictatorship - this was due to its method of conception. The Spanish civil war broke out in 1936 and eventually led to Franco leading a dictatorship over Spain. Therefore, analysing the reasons why the civil war occurred will be the focal point. There are three crucial factors as to why the war erupted: the uneven levels of development throughout Spain in the 1930s, the deep-rooted grasp Catholicism had on the Spanish people, and the rigid structure that formed in the Spanish military and the anti-democracy ideology that was exacerbated in the 1920s-30s. There are many additional factors, most prominent the final loss of empire in 1898, that contributed to these overarching ones, however insurmountably it was mainly due to the Republic?s inability to quell the Spanish military which caused the eruption of the civil war and thus the fall of democracy in 1939. The uneven levels of development in urban Spain, la Espana profunda, the deeper South, and the more industrialised northern parts of Spain created precedent for a series of cultural wars to occur. ...read more.

For la Espana profunda this was the Republic?s ?greatest offence? (Helen Graham). So the fact that this social group did not even demand for voting or change in the first place is being affected so profoundly (the Church was a crucial part of their community serving both a pastoral and practical role), meant that it was more likely to side with the opposition to such government. For these populations, democracy was never deep-rooted as the Church had always backed the monarchy thus such leadership style always being the more preferred option. The Africanistas would not have been able to organise such widespread support for their coup if had it not been for the Church (Helen Graham). Catholicism was deep rooted in Spain and it allowed for many social groups to come together to voice their discontent with the government. For example, Cardinal Primate called upon the faithful to rearm against the government and came close to calling the Republic illegitimate. This shows the Church?s discontent with the government, which is given due to its attempts of trying to displace it, but also shows demonstrates democracy?s weak installation and assimilation within the Church as they are willing to adopt violence rather than incite change through political or democratic means. The Church?s hostile attitude towards democracy undermined and the cardinal?s outspoken views just reinforced deep-seated opinions of some social classes e.g. ...read more.

and the fact that the Africanistas were secluded in Spanish Morocco meant that they would have the most reductive views of what was wrong with metropolitan Spanish society and politics and only focused on traditionalist views. The militaristic option also appealed to many because it seemed to be the only way change was brought about e.g. Primo de rivera dictatorship, the ending of dictatorship. Andrew Forrest said that ?military hostility to the Republic reflected both public and private concerns?. This shows that through the military, different social classes were able to embody their concerns with the government in a militaristic and physical form. In conjunction with the organizational purpose the Church served which perpetuated discontent within traditional households, the uneven levels of development and culture became apparent with the eruption of the Spanish civil war. The republic was unable to satisfy the large changes in the military and their structural reform only angered them. However, the government?s lack of coordinated action can be summed up by the fact that knowing that there were secretly open plans to overthrow the government, yet they did nothing about it. Thus democracy was unable to uphold itself in Spain because the Republic imposed drastically Left policies much too fast (due to not being in power for so long) and ineffectively, without addressing deep-seated cultures and ideologies. This manifested in the military and wide support grew for traditional values and the riddance of the democratic government. ...read more.