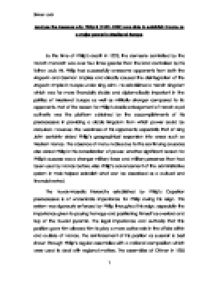 Analyse the Reasons why Philip II (1180-1223) was able to establish France as a major power in Medieval Europe By the time of Philip's death in 1223, the demesne controlled by the French monarch was over four times greater than the land controlled by his father Louis VII. Philip had successfully overcome opponents from both the Angevin and German Empires and directly caused the disintegration of the Angevin Empire in Europe under King John. He established a French Kingdom which was far more financially stable and diplomatically important in the politics of Medieval Europe as well as militarily stronger compared to its opponents. Part of the reason for Philip's drastic enlargement of French royal authority was the platform obtained by the accomplishments of his predecessors in providing a stable kingdom from which power could be acquired. However, the weakness of his opponents; especially that of King John certainly aided Philip's geographical expansion into areas such as Western France. The absence of many nobles due to the continuing crusades also aided Philip in his consolidation of power. Another significant reason for Philip's success was a stronger military force and military presence than had been used by France before. Also Philip's advancement of the administrative system in Paris helped establish what can be described as a cultural and financial revival. The Feudo-Vassalic hierarchy established by Philip's Capetian predecessors is of undeniable importance for Philip during his reign. This system was rigorously enforced by Philip throughout his reign, especially the importance given to paying homage and positioning himself as overlord and top of the feudal pyramid. ...read more.

Such techniques were deployed not just against the Angevin monarchs but also against powerful Counts and Dukes bordering France like Blois and Champagne. Philip took advantage of the death of Theobald of Champagne in order to perform a political intervention due to his connections through his mother; a similar situation arose in Burgundy with the death of Duke Odo II in 1218. These direct attempts to assert royal authority not only increased the geographical extent of royal control but also increased the reliance placed on the French monarchy in monitoring affairs and selecting successors and thus creating an ideal environment for Philip to govern within Europe. Philip's aggravation of the Angevin disputes, which continued through the reigns of Henry II and Richard, should not be considered a new concept but rather a continuation of Capetian policy towards the Angevin monarchs, this was certainly successful in weakening the Angevin empire internally which would have made later conquests easier. What is however a change is Philip's continued use of military support in invasions; this can be seen through his invasion of Berry in 1187 and confrontations in Le Mans in 1189. Philip achieved his greatest successes against John; his experience, reputation and popularity were key to success in Angevin continental lands. John had little experience of military command and war compared not just to Philip but to his predecessors; Henry II and Richard. Unlike the other three figures, John has never been on crusade and had limited experience in military campaigns, for example his campaign in Ireland during the reign of Henry II was ultimately a disaster. ...read more.

Therefore, the move to Paris of all records can be seen as immensely beneficial to the financial stability and economic wealth of the monarch. Secondly, Philip broke the power of key influential families within the offices of administration. Such families had seen the positions as hereditary and used it to gain power and wealth, therefore by appointing lesser nobles, and in some cases leaving positions such as chancellor vacant, Philip was asserting his own power amongst those in his demesne and establishing himself as overlord. In conclusion, the combination of legal authority obtained from the feudal system established by his predecessors, and military force, proved to be incredibly successful in expanding the French demesne and increasing the sphere of influence. In some ways Philip was fortunate to receive advantageous circumstances for expansion such as the political backdrop of the third and fourth crusades and the weakness of his enemies in both the Angevin and German Empires. However, Philip capitalised on these advantages through aggressive leadership, both politically and militarily, and the culmination of this at the battle of Bouvines helped consolidate France's position as a major power. Further improvements were made to the administrative system which aided financial wealth of the empire which could be used to continue these foreign policies, which is why it is said that Philip was the last "king of the franks" and first "king of France", such was his impact on establishing a major power in Europe. ?? ?? ?? ?? Simon Lock 1 ...read more.