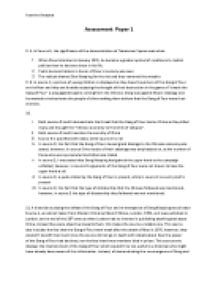 Analysis of sources on the Gang of Four in China.

﻿Yasmine Owaynat Assessment: Paper 1 9. A. In Source A, the significance of the demonstration at Tiananmen Square was when: 1. When Zhou Enlai died in January 1976, he became a greater symbol of resistance to radical policies than he had ever been in his life. 2. Public demonstrations in honor of Zhou?s memory was seen 3. The radicals blamed Den Xiaoping for the riot and they removed the wreaths 9. B. In source C, a picture of young children is displayed as they have the picture of the Gang of Four on the floor and they are brutally enjoying the thought of their destruction in the game of ?smash the Gang of Four? a propagandist game coming from the Chinese. Deng was against Mao?s ideology and he wanted to indoctrinate the people of china making them believe that the Gang of Four were their enemies. 10. 1. Both sources D and E demonstrate the threat that the Gang of Four had on China as they killed many and brought the ?Chinese economy to the brink of collapse?. ...read more.

This source also includes the fact that the Gang of Four went weak after the death of Mao in 1976, however, they wouldn?t benefit that much since the source did not go in depth with details about how the power of the Gang of Four had declined, nor the fact that three members died in prison. This source only displays the imprisonment of the Gang of Four which wouldn?t be too useful to a historian who might have already been aware of this information. Instead, of demonstrating the re-emergence of Deng and emphasizing on the defeat of the Gang of Four, this source emphasizes more on the events that have taken place during the Tiananmen square in 1976, the death of Mao and Zhou and their effects on the Chinese society. Source B, an extract from an ?official broadcast in Tiananmen Square by Mayor of Beijing, 5 April 1976, taken from China since 1919: Revolution and Reform by Alan Lawrance, London, 2004? is not a valuable source for a historian studying the defeat of the Gang of Four and re-emergence of Deng Xiaoping as they wouldn?t find it a reliable source since it was written 28 years after the ...read more.

According to Source B, people began to protest against central authorities and Deng Xiaoping was accused of planning the Tiananmen Square, he was thought of as a capitalist-roader, one who attempts to pull the Revolution in a capitalist direction while pretending to advocate socialism. The Gang of Four struggled to defend Chairman Mao and the Party Central Committee; they ordered the square to be cleared. According to source A, the position of the Gang of Four was secure only as long as Mao was available to support them, in less than a month after Mao?s death, in 1976, the Gang of Four were arrested ?presented with evidence of their crimes?. According to source E, they were criticized in a ?flood of anti-propaganda that struck chords among a population that were brutalized and exhausted by events of the preceding decade?, as demonstrated in Source C by the image of the children who are enjoying their time playing ?smash the Gang of Four?. The Gang of Four were opposed by many as they were primarily blamed for the events of the Cultural Revolution. According to source D, the sabotage of the Gang of Four brought the Chinese economy to the brink of collapse, they were said to have persecuted more than 700,000 people - killing almost 35,000,together with their accomplices. ...read more.