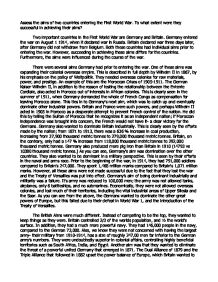 Assess the aims of two countries entering the First World War. To what extent were they successful in achieving their aims?

Assess the aims of two countries entering the First World War. To what extent were they successful in achieving their aims? Two important countries in the First World War are Germany and Britain. Germany entered the war on August 1 1914, when it declared war in Russia. Britain declared war three days later, after Germany did not withdraw from Belgium. Both these countries had individual aims prior to entering the war. However, succeeding in achieving these aims differs for the countries. Furthermore, the aims were influenced during the course of the war. There were several aims Germany had prior to entering the war. One of these aims was expanding their colonial overseas empire. This is described in full depth by Wilhelm II in 1867, by his emphasis on the policy of Weltpolitik. They needed overseas colonies for raw materials, power, and prestige. An example of this are the Moroccan Crises of 1905-1911. The German Kaiser Wilhelm II, in addition to the reason of testing the relationship between the Entente Cordiale, also acted in Morocco out of interests in African colonies. ...read more.

This is seen by their efforts in the naval and arms race. Prior to the beginning of the war, in 1914, they had 791,000 soldiers compared to Britain's 247,000. They spent 1,468 million marks compared to Britain's 1,071 million marks. However, all these aims were not made successful due to the fact that they lost the war and the Treaty of Versailles was put into effect. Germany's aim of being dominant industrially and militarily was a failure. It's army was reduced to 100,000 men; the army was not allowed tanks, airplanes, only 6 battleships, and no submarines. Economically, they were not allowed overseas colonies, and lost much of their territories, including the vital industrial areas of Upper Silesia and the Saar. As you can see from the above, the Germans wanted to dominate the other great powers of Europe, but this failed due to their defeat in World War 1, and the introduction of the Treaty of Versailles. The British Aims were much different. Instead of competing to be the top, they wanted to keep things as they were. ...read more.

As you can see from the above, Germany For both countries, the war influenced life in society and their aims. One strong example is Britain. The war influenced the aim of retaining the position as the number one colonial power because it weakened their status. They had to concentrate their efforts in the war, thus could not maintain the overseas colonies. To conclude, the aims of the countries were different. Germany, to summarize, wanted to dominate Europe industrially and economically, and to expand their overseas empire. England wanted to stay as they were, and put down the threat of a powerful united Germany. However, Germany was unsuccessful to a large extent, because they could not achieve any of their aims due to the terms of the Treaty of Versailles. This connects to the aims of Britain, who succeeded in their aim of weakening Britain. Britain, however, could not maintain it's status as it was because of the outbreak of war and the worsened state of the economy. As the evidence in the paragraphs shows, the explanation is this: Germany was to no extent successful in achieving it's aims, and Britain was successful to some extent- and this result was determined by the course of World War 1. ...read more.