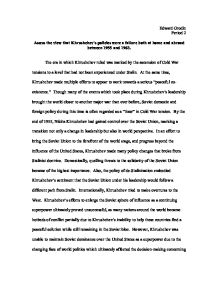 Assess the view that Khrushchevs policies were a failure both at home and abroad between 1955 and 1963.

Edward Grodin Period 2 Assess the view that Khrushchev's policies were a failure both at home and abroad between 1955 and 1963. The era in which Khrushchev ruled was marked by the ascension of Cold War tensions to a level that had not been experienced under Stalin. At the same time, Khrushchev made multiple efforts to appear to work towards a serious "peaceful co-existence." Though many of the events which took place during Khrushchev's leadership brought the world closer to another major war than ever before, Soviet domestic and foreign policy during this time is often regarded as a "thaw" in Cold War tension. By the end of 1955, Nikita Khrushchev had gained control over the Soviet Union, marking a transition not only a change in leadership but also in world perspective. In an effort to bring the Soviet Union to the forefront of the world stage, and progress beyond the influence of the United States, Khrushchev made many policy changes that broke from Stalinist doctrine. Domestically, quelling threats to the solidarity of the Soviet Union became of the highest importance. Also, the policy of de-Stalinization embodied Khrushchev's sentiment that the Soviet Union under his leadership would follow a different path from Stalin. Internationally, Khrushchev tried to make overtures to the West. Khrushchev's efforts to enlarge the Soviet sphere of influence as a continuing superpower ultimately proved unsuccessful, as many nations around the world became hotbeds of conflict partially due to Khrushchev's inability to help these countries find a peaceful solution while still remaining in the Soviet bloc. ...read more.

Though Khrushchev's predecessor, Malenkov, had engineered the concept of "peaceful competition," it was in fact Khrushchev who applied this policy in foreign relations. Support of wars for National Liberation formed a significant policy point for Khrushchev. Soviet aid to foreign countries aimed to gradually undermine the power of the United States abroad; likewise, Khrushchev openly supported countries of non-alignment in the belief that communism would prevail as the superior choice over capitalism for a nation. One of Khrushchev's first orders of business involved the Soviet Union's recognition of Austrian neutrality. Keylor believes that the removal of Allied (including Soviet) troops from Austria implied that the Soviet Union was prepared to negotiate with the West to settle their differences. However, Soviet rejection of the proposed "open skies" agreement at the Geneva Conference as well as disagreement concerning the political future of Germany did nothing to add to the quelling of differences. Yet, historian Peter Calvocoressi claims that any possibility of a settling of differences due to the open communication at Geneva was interrupted largely due to the issues in Poland and Hungary. The Suez Canal Crisis and the ensuing Arab-Israeli War in 1956 strictly redefined allegiances and inadvertently pitted the United States against the Soviet Union. Although the USSR gained presence in the Middle East, Eisenhower's fear of this presence led to the Eisenhower Doctrine which would allow the United States to intervene in the Middle East given a situation of armed aggression. ...read more.

In the end, it was Khrushchev who by 1963 gained apparent superiority in many aspects of technological development. Between 1955 and 1963, Khrushchev successfully navigated the waters of diplomacy in avoiding the outbreak of war, the sum of all international fears. He did provide a "thaw" in Cold War tensions which likely would not have occurred under the leadership of Stalin. Many historians attempt to attribute his success in subverting war to his flamboyancy, his love of travel, and his outgoing personality. However, the price of this success came in the form of crumbling relations with the United States and even the satellite states in the Soviet Union. After Stalin, the Soviet people as well as the international community found reprieve and the possibility of ending Cold War tensions through Khrushchev. Although he was unable to destroy the barriers separating East and West, he, unlike Stalin, made a conscious effort to achieve some semblance of peaceful co-existence; in fact, some may say that he reinforced these barriers, as seen in the symbol of the Berlin Wall. Yet, Khrushchev may have spared the world another war by maintaining these boundaries between East and West. Had he attempted to completely dominate or completely undermine in world politics, backlash against the recovering superpower could have been devastating. Through the vehicle of history and the privilege of hindsight, Khrushchev's role in the Cold War may have been the most significant road bump to or the greatest savior of international peace in modern history. ...read more.