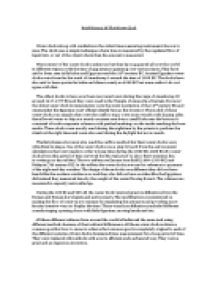 Brief History Of The Water Clock

﻿Brief History Of The Water Clock Water clocks along with sundials are the oldest time measuring instruments known to man. The clock uses a simple technique where time is measured by the regulated flow of liquid into or out of the object where then the amount is measured. The inventor of the water clock is unknown but they have appeared all over the world in different regions with the time of appearance spanning over various times. They have said to been seen in Babylon and Egypt around the 16th century BC. Ancient Egyptian water clocks were found in the tomb of Amenhotep I around the time of 1500 BC. ...read more.

These clocks were mostly used during the nighttime by the priests to perform the rituals at the right time and were also used during the daylight but not as much. The Babylonians however also used the outflow method but their water clocks were cylindrical in shape. Use of the water clocks was a step forward from the astronomical calculations that were made in order to keep time during the 2000 BC-1600 BC. No water clocks from this period of time survived but the real proof to show their existence lies in writings on clay tablets. The two tablets are Enuma-Anu-Enlil (1600?1200 BC) and Mulapin (7th century BC). ...read more.