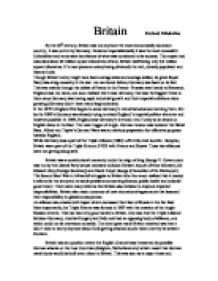 Britain Richard M�ekallas By the 20th century, Britain was not anymore the most economically dominant country, it was outrun by Germany. However imperialistically it was the most successful. Colonialism and army were key factors of what was considered to be success. The empire had colonized about 30 million square kilometres of land, Britain itself being only 0,3 million square kilometres. It's most precious colony being obviously the rich, densely populated and historic India. Though Britain's army might have been average sized and average skilled, its great Royal Navy was a big necessity in the war. As mentioned before, Germany was back on its feet. This was mainly through the defeat of France in the Franco- Prussian war thanks to Bizmarck. England was not naive, and soon realised that it was Germany, that was the biggest threat to them since Germany was having rapid industrial growth and their imperial ambitions were growing (Germany didn't have many large colonies). In the 1870's England first begins to sense Germany's industrial advances harming them. But by the 1890's Germany was already trying to attack England's imperial politics wherever and however possible. In 1898, England saw Germany's intrusion into Turkey as an attack on English status in the East. The main trigger of Anglo- German tension was however the Naval Race. Alfred von Tirpitz's German Navy was an obvious preparation for offensive purposes towards England. ...read more.

Germans were conceived as barbarians (Huns) to the public. Britain' main pride was the Royal Navy which was the strongest and most experienced in the world. Its principle stood on the fact that the Royal Navy always has be stronger than the two next best navies put together. There were many sea battles in WWI especially against Germany. The biggest one occurred in Jutland on May 31st, 1916. Britain suffered about 6100 casualties while Germany suffered only 2500 and many less ships. Still the battle of Jutland is considered to be won by the British because Germany did not reach its goal and Britain still remained in control of the North Sea. After the severe casualty loss in Jutland, the British navy focused mainly on fighting against German U- Boats and the submarines in the Mediterranean. By the end of the war, the Royal Navy had lost about 170 ships, and 35 000 men. The army Britain had was not big, it was fairly average size. At the outbreak of the war in August 1914, Britain had about 235 000 regular troops. When Lord Kitchener was appointed new war minister, he started campaigning and recruiting new volunteer troops. This went fast, with about 33 000 people being recruited per day! By 1916, about 2.6 million men had already volunteered. This caused a major shortage of armoury including weapons. The number of soldiers was still not thought to be enough though, and because of the heavy losses, the government passed the Military Service Act which made participating in war compulsory to everyone. ...read more.

This meant that a lot of men signed themselves up to war. No one could have expected the war to last four years with such heavy casualties. Public opinion and support for the country's participation in the war became negative. Many soldiers wrote letters and poems back home describing their life in the trenches which attributed to the disliking of the war. It was David Lloyd in fact who took the responsibility of motivating people in Britain to maintain the number of soldiers and factory workers by using the media. Newspaper articles and television-shows were shown which stressed that the success of the war depended on the people back home. Other methods were used as well but still, the second half of the Great War remained negative in the public eye. At the end of the war there was a short relief in the public- the Great War was over. People now wanted to see some results for such great sacrifice and sufferings. Britain had won, but had not gained much from it other than a confident and much more respected name. Prime minister Lloyd George gave a speech saying: "Germany is going to pay restitution, reparation, and indemnity, and I have personally no doubt that we will get everything out of her that you can squeeze out of a lemon and a bit more" Of course, how much is it possible to take from a ruined and squashed country. None the less, after this speech the country gained much better public opinion. It was a matter of convincing the people of accomplishment and of the nation recovering quickly. ...read more.