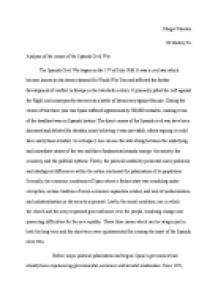 Causes of the Spanish Civil War

﻿Margot Marston IB History SL Analysis of the causes of the Spanish Civil War The Spanish Civil War began on the 17th of July 1936. It was a civil war which became known as the dress rehearsal for World War Two and affected the further development of conflict in Europe in the twentieth century. It primarily pitted the Left against the Right, and consequently was seen as a battle of democracy against fascism. During the course of this three year war Spain suffered approximately 500,000 casualtie, making it one of the deadliest wars in Spanish history. The direct causes of the Spanish civil war have been discussed and debated for decades, some believing it was inevitable, others arguing it could have easily been avoided. In retrospect, one can see the web strung between the underlying and immediate causes of the war and three fundamental strands emerge: the society, the economy, and the political systems. Firstly, the political instability presented many problems and ideological differences within the nation continued the polarization of its population. Secondly, the economic conditions of Spain where a forlorn state was crumbling under corruption, archaic tradition of socio-economic separation existed, and lack of modernization and industrialization in the society in general. ...read more.

Industrial production increased threefold from 1923 to 1930 and in 1925 the rebellion in Morocco was ended. However, the great depression of the 1930?s greatly affected Spain?s economy and large debt and further unsolved problems led to De Rivera?s resignation. These events compromise the long-term causes of the war and were the unstable foundation which Spain continued to build from in the following decade. In relation to the short-term, the primary cause of the war was the political dissention which fuelled continuous conflict and tension in government and society. In April 1931, municipal elections were held which resulted in the establishment of the Second Republic under the center-left. The monarchy was abolished; however, the new republic was immediately confronted with the ruins that the preceding government had left behind. Manuel Azana, the new prime minister aimed to modernize Spain, yet each new reform was seen as an attack on a form of the right-wing movement. The church?s power and the structure of the army were revised and church and state were made two separate entities and the army was reduced yet also unknowingly radicalized with the nationalist core remaining intact. 10,000 schools were opened to battle the vast illiteracy in the nation. ...read more.

On 12 July 1936 members of the Falange murdered Lieutenant José Castillo of the Assault Guards police force and an important member of the socialist party. The following day, members of the Assault Guards arrested José Calvo Sotelo, a leading Spanish monarchist and a prominent parliamentary conservative. While in the custody of the police Calvo Sotelo was shot. The killing of Calvo Sotelo, a prominent member in society, with involvement of the police, aroused suspicions and provoked strong reactions among the government's opponents on the right. Massive reprisals followed. Although the conservative Nationalist generals were already in advanced stages of a planned uprising, the event provided a catalyst and convenient public justification for their revolt in Morocco lead under General Franco. In retrospect the war would have occurred whether this event had happened or not, with the population so openly separated however, it had been the trigger which marked the beginning of the civil war All these events, the long-term, short-term and immediate, set the stage for civil unrest and ultimate war which ensued three years of bloodshed. The Nationalists against the Republicans, represented for many nations Democracy against Fascism which preluded the atrocity which would begin only a few years on. These events, whether political, societal or economic, all contributed to the eventual destruction of the country and where all in one way, shape or form responsible for causing the Spanish Civil War. ...read more.