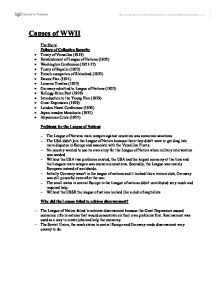 Causes of WWII The Story: Failure of Collective Security * Treaty of Versailles (1919) * Establishment of League of Nations (1920) * Washington Conference (1921-22) * Treaty of Rapallo (1922) * French occupation of Rhineland (1923) * Dawes Plan (1924) * Locarno Treaties (1925) * Germany admitted to League of Nations (1925) * Kellogg-Brian Pact (1928) * Introduction to the Young Plan (1929) * Great Depression (1929) * London Naval Conference (1930) * Japan invades Manchuria (1931) * Abyssinian Crisis (1935) Problems for the League of Nations * The League of Nations main weapon against countries was economic sanctions * The USA didn't join the League of Nation because there they didn't want to get drag into more disputes in Europe and associate with the Versailles Treaty. * No country wanted to use its own army for the League of Nation when military intervention was needed. * Without the USA two problems existed, the USA had the largest economy at the time and the Leagues main weapon was economic sanctions. Secondly, the League was mainly European instead of worldwide. * Initially Germany wasn't in the league of nations and it looked like a victors club, Germany was still powerful even after the war. * The small states in central Europe in the League of nations didn't contributed very much and required help. ...read more.

* Review of Causes Short term causes of WWII * Hitler's attempt to rearm Germany alarmed the other nations. In 1933 he removed Germany from the League of Nations. His next step was to unify Austria and Germany which was forbidden by the Treaty of Versailles. Initially there was a coup in Austria but the it failed soon afterwards. Instead a plebiscite was voted on wether the German people wanted to be reunited, Hitler used this to allow compulsory military services and rearmament. * In response to this, Britain, Italy and France created the Stresa front to contain Germany, however the three didn't agree how it would be used and it was soon abandoned. * In 1936 Hitler remilitarized the Rhineland, Britian and France didn't respond to them. * Germany's participation in the Spanish Civil War was used as a way to prepare his forces. * The Rome-Berlin Axis and Anti-Comintern Pact further supported the idea that Hitler was preparing for a war. * The Hossbach Memorandum was a meeting with Hitler and his key military men. The meeting consisted of his long term goals such as how to handle the france, anti Bolshevism, living space in the east. James Sheehan points out that the purpose of the meeting was to root out anyone high up in the military that didn't support Hitler. ...read more.

* Long term causes * Short term causes * Immediate causes Long term causes * Western powers forcing Japan out of isolation (feudal era) * Saw Bolsheviks as an ideological danger in Russian civil war * Japan seen as peace keeper in Asia from western forces * The Treaty of Versailles gave Japan influence over China; Britain and the USA saw this as a cocern and intiated the Washington Conference. The Four Power and Five Power agreement increased Japan influence and lessened USA's over China. * 1920's in Japan saw radicalism in both sides of the political spectrum. Short term causes * The military attacked Manchuria in 1931 which alarmed the West. * Japan left the League of Nations in 1933 * Japan left the Washington Naval Treaty in 1934 after being unhappy with an inferior navy to the USA * The Second Sino-Japanese war lead directly to the Pacific war, with Japan having no clear way to end the war. * USA was unwillingly to get involved with the conflict but started providing aid to China in 1938. From 1937 the Japanese government was taken over by the military. Immediate causes * USA, Britian and Netherlands responded to Japanese attack on souther Indochina with an embargo. * USA demanded for Japan to withdraw from China but was impossible; Pearl Harbour was attacked in order to get the resources it needed. ...read more.