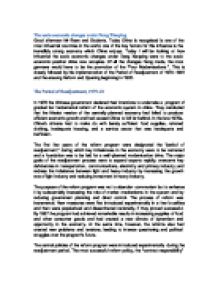 The socio economic changes under Deng Xiaoping Good afternoon Mr Bean and Students. Today China is recognised is one of the most influential countries in the world, one of the key factors for this influence is the incredibly strong economy which China enjoys. Today I will be looking at how influential the socio economic changes under Deng Xiaoping were to the socio economic position china now occupies. Of all the changes Deng made, the most germane would have to be the promotion of the "Four Modernisations". This is closely followed by his implementation of the Period of Readjustment of 1979-1981 and the ensuing Reform and Opening beginning in 1982. The Period of Readjustment, 1979-81 In 1978 the Chinese government declared their intentions to undertake a program of gradual but fundamental reform of the economic system in china. They concluded that the Maoist version of the centrally planned economy had failed to produce efficient economic growth and had caused China to fall far behind. In the late 1970s, China's citizens had to make do with barely sufficient food supplies, rationed clothing, inadequate housing, and a service sector that was inadequate and inefficient. The first few years of the reform program were designated the "period of readjustment," during which key imbalances in the economy were to be corrected and a foundation was to be laid for a well-planned modernization drive. ...read more.

Unlike earlier periods, when China was committed to trying to achieve self-sufficiency, under Deng Xiaoping foreign trade was regarded as an important source of investment funds and modern technology. As a result, restrictions on trade were loosened further in the mid-1980s, and foreign investment was legalized. The most conspicuous symbols of the new status of foreign trade were the four coastal special economic zones, which were created in 1979 as enclaves where foreign investment could receive special treatment. This investment helped the Chinese economy boom. In addition, the Chinese government established a series of joint ventures with foreign capital to establish companies in industries hitherto unknown in China. By 2001, China became a member of the World Trade Organization, which has boosted its overall trade in exports/imports-estimated at $851 billion in 2003-by an additional $170 billion a year. More significant for China's economic development was the designation in April 1984 of economic development zones in the fourteen largest coastal cities all of which were major commercial and industrial centres. Although the reform program achieved impressive successes, it also gave rise to several serious problems. One problem was the challenge to party authority presented by the principles of freemarket activity and professional managerial autonomy. ...read more.

I utilised this source several times throughout my speech as I like the word's strata and stratification. It seems to be a reliable source with a lot of relevant information however as usual I wrote my speech mostly off the top of my head with little reference to any facts. ? Lynch, M. (2008). Access to History: The People's Republic of China 1949-76. Arnold. * This source was actually of great interest, It was by far the most enjoyable of them to read and had a clear direction in terms of the message it wanted to convey. It contained some useful albeit questionable statistics. But once more as I draw closer to the wee hours of the morning this is due reliability goes out the window if it helps me justify what I just pulled out of my arse. ? Phillips MR, L. X. (2002). Suicide rates in China, 1995-99. Lancet. * This was a fascinating read that showed interesting trends and relationships within the culture of suicide in china. However it was not helpful to my argument in fact it would of hindered and as such was not used in my final presentation. The source itself appears to be valid and reliable. ? Ross, S. (1989). China Since 1945. Witness History. ...read more.