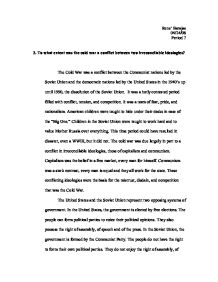 Rene' Barajas 04/24/08 Period 7 3. To what extent was the cold war a conflict between two irreconcilable ideologies? The Cold War was a conflict between the Communist nations led by the Soviet Union and the democratic nations led by the United States in the 1940's up until 1990, the dissolution of the Soviet Union. It was a hotly contested period filled with conflict, tension, and competition. It was a team of fear, pride, and nationalism. American children were taught to hide under their desks in case of the "Big One." Children in the Soviet Union were taught to work hard and to value Mother Russia over everything. This time period could have resulted in disaster, even a WWIII, but it did not. The cold war was due largely in part to a conflict in irreconcilable ideologies, those of capitalism and communism. Capitalism was the belief in a free market, every man for himself. Communism was a stark contrast, every man is equal and they all work for the state. These conflicting ideologies were the basis for the mistrust, disdain, and competition that was the Cold War. ...read more.

It relies upon terror and oppression, a controlled press and radio; fixed elections, and the suppression of personal freedoms. The events that initiated the cold war also show how these ideologies were ultimately incompatible with each other. By 1945, at the Yalta Conference, the Soviet Union obtained the Curzon Line as her new boundary line with Poland and also the control of the eastern zone of Germany. As the war was drawing to a close in May 1945, the Soviet Union quickly consolidated her control of Eastern Europe. The Red Army began by influencing the post-war elections. They intimidated the voters and changed the voting lists as they desired. President Roosevelt was friends with Stalin and believed he would keep the promises he made at Yalta to set up freely elected parliamentary governments. United States Policy changed when Roosevelt died and President Harry Truman took over. The new President was a complete contrast to Roosevelt. He did not believe the communists. He thought that the communists would not set up democratic governments in Eastern Europe. He also believed that after the Soviet Union had established her control in Eastern Europe, she would continue to extend her influence into Western Europe. ...read more.

Williams challenged the long-held assumptions of "orthodox" accounts, arguing that Americans had always been an empire-building people, even while American leaders denied it. According to Williams, U.S. policymakers shared an overarching concern with maintaining capitalism domestically. In order to achieve that objective, they pursued an "open door" policy abroad, aimed at increasing access to foreign markets for U.S. business and agriculture. From this perspective, a growing economy domestically went hand-in-hand with the consolidation of U.S. power internationally. Finally, there is the most recent "post-revisionist" view of the outbreak of the cold war. This view can be illustrated by Peter Calvocoressi in his popular book World Politics Since 1945. Calvocoressi believes that it was the conflict in ideologies between these two superpowers that led to this general disdain and mistrust. In conclusion, the cold war was caused largely due to the conflicting ideologies of Communist Russia and Capitalistic America. These disagreements led to arguments, which led to mistrust, and finally a great uneasy tension that almost boiled over into ultimate annihilation in the form of nuclear warfare. However, as historian Isaac Deutscher writes "It is useless to try to discover who made the first move to break the alliance. It is impossible to trace the first 'broken promise'." ...read more.