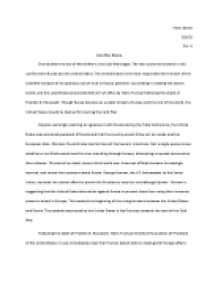 Cold War Blame. Though Russia did pose as a viable threat to Europe and the rest of the world, the United States should be blamed for starting the Cold War.

﻿Peter Bertel 3/9/12 Per. 6 Cold War Blame Shortly after the end of World War II, the Cold War began. The two countries involved in this conflict were Russia and the United States. The United States is the most responsible for the start of the Cold War because of its paranoia, lack of trust in Russia, greed for succeeding in creating the atomic b**b, and the unprofessional presidential term of office by Harry Truman following the death of Franklin D. Roosevelt. Though Russia did pose as a viable threat to Europe and the rest of the world, the United States should be blamed for starting the Cold War. Despite seemingly reaching an agreement with Russia during the Yalta Conference, the United States was extremely paranoid of Russia and that the country would strike out an invade another European state. Winston Churchill also had his fears of the Soviets? intentions. Not a single person knew whether or not Stalin would send his men marching through Europe, attempting to spread communism like a disease. This would no doubt cause a third world war. ...read more.

Throughout the meeting, Truman grew increasingly hostile, disrespectfully interjecting several times to make his point clear. This offended Molotov, and overall, tarnished the United States? relationship with Russia. Truman?s immaturity hampered the relationship between the two countries, and was a significant factor leading to the Cold War. Another factor that led to the start of the Cold War was the disunity between the U.S government officials. After Roosevelt?s death, the United States? view on Russia shifted from trusting to great suspicion. Also, Truman?s war cabinet became very separated in their views, and could no longer stay in consensus. This disunity between these officials and the President led to an unstable government in the United States and the making of poor decisions. Shortly before the Potsdam Conference, on the 24th of July, Truman mentioned to Stalin that the United States was in possession of a new weapon with incredible destructive power. This posed as a large concern for Russia, who felt the animosity felt towards them by the United States. Stalin knew he had to take action, and the evening after Truman?s sly remark, Stalin ordered his chief nuclear scientist, Kurchatov, to accelerate Russia?s work on developing an atomic b**b. ...read more.

Arguments can also be made that Russia was to blame for the Cold War. Because of its previous actions of invading other western European countries, the United States did not trust Russia. Also, the Soviets intended to occupy Poland and enforce communism. International views of Russia were very strained and not very trusting of the country?s intentions. Had Russia come to terms with other countries and put an end to any concerns about its? intentions, the Cold War could have potentially been prevented. If there was no tension felt with Russia, the Cold War would never have happened. Because of Russia?s imperialistic intentions and attempts to spread communism, the rest of the world felt intimidated, which acted as the fuel for starting the Cold War. The blame for the start of the Cold War belongs to the United States. Russia also had an impact in the start of the arms race due to the paranoia the country induced to the rest of the world. The struggles within the United States? government made it very unstable, and would lead to several atrocious decisions. Had the United States been wiser with its foreign affairs, the Cold War could have been prevented. ...read more.