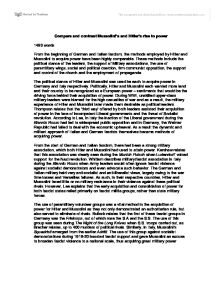 Compare and contrast Mussolini's and Hitler's rise to power

Compare and contrast Mussolini's and Hitler's rise to power 1493 words From the beginning of German and Italian fascism, the methods employed by Hitler and Mussolini to acquire power have been highly comparable. These methods include the political stance of the leaders, the support of Military associations, the use of paramilitary wings, social and political coercion, firm communist opposition, the support and control of the church and the employment of propaganda. The political stance of Hitler and Mussolini was used be each to acquire power in Germany and Italy respectively. Politically, Hitler and Mussolini each wanted more land and their country to be recognized as a European power - sentiments that would be the driving force behind their acquisition of power. During WWI, unskilled upper-class military leaders were blamed for the high casualties of war and as a result, the military experience of Hitler and Mussolini later made them desirable as political leaders. Thompson relates that the 'third way' offered by both leaders assisted their acquisition of power in the face of incompetent Liberal governments and the threat of Socialist revolution. ...read more.

Militarily, the authoritative control demonstrated by fascist military wings in both countries gave the illusion of stability and purpose to countries and peoples devastated by WWI and Versailles. Hitler and Mussolini alike encouraged nationalism and pride, merging these concepts with fascism. Broszat relates that in Germany an interest in cultural music was nurtured and n**i flags were raised in every town. The values of family and patriotism were exaggerated - a clear example of this was seen in the Corfu incident. According to Lee, Mussolini used the murder of an Italian general on the Greek island of Corfu, to manipulate the emotions of the Italian public thereby gaining votes for his party. Mussolini's demands for apology and recompense were seen as bold, strong and fiercely nationalistic, and he was viewed as a hero. Unlike Hitler, however, Mussolini did not use coercion to create anti-semitic and anti-communist attitudes to the extent that the n**i's did. Mason describes the Burning of the Reichstag, and relates that Hitler used this incident to manipulate political and public opinion against socialism. While the communist party was a major political party in both Germany and Italy, a vast majority of the populations (particularly the middle and upper classes) ...read more.

The adoption of the names 'Fuhrer' and 'Il Duce' for Hitler and Mussolini were also indicative of personality cults. According to Lee, the highly nationalistic opinions encouraged by both leaders found expression in common demonstrations such as military rallies, balcony speeches, roman salutes and the apparent rebirth of traditional culture and music. Boszat explains that, unlike Mussolini, Hitler used highly anti-semitic propaganda to unite the nation against common enemies, thereby gaining power from a united n**i front. Another propaganda method used by Hitler andMussolini was the way both leaders were 'detached' from the doings of their military units. Whitlam relates that Mussolini's arrest of Dumini during the Matteoti Crisis, acquitted him of blame, and Mommson describes the Night of the Long Knives when Rohm, the leader of the S.A., was murdered, detaching Hitler from S.A. violence. This caused the public to believe that the wrongs of the Fascist party could not be blamed on its leader, giving Hitler and Mussolini power over the minds of the people. The methods Hitler and Mussolini employed in acquiring power were both similar and contrasting, these comparisons being clearly seen in their political stance, the nature of army associations, the utilization of fascist militia groups, coercion of political and public opinions, communist opposition, exploitation of religious support and the methods of propaganda. ...read more.