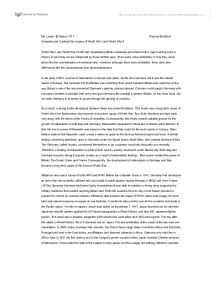 Ms. Lewis- IB History Yr11 Thomas Brelsford Compare and Contrast the causes of World War I and World War II World War I and World War II both had devastating effects worldwide and where both a major turning point in History. Even today we are influenced by these terrible wars. There were a few similarities in how they came about like the colonialisation of overseas land. However, although there were similarities, there were also differences like the circumstances that arose beforehand. In the early 1900's a sense of nationalism in Europe took place. At this time Germany felt it was the natural leader of Europe. The Germans felt that Britain was restricting their power because Britain was supreme on the sea. Britain's rule of the sea prevented Germany's gaining colonies abroad. Colonies could supply Germany with resources needed to maintain their army and give Germany the prestige it wanted. Britain, on the other hand, did not want Germany to increase its power through the gaining of colonies. ...read more.

Because Germany had been highly industrialized it was able to maintain a strong army supported by military machines that rivalled anything Britain had. With this powerful force to rely on the Kaiser planned to expand his control on oversea colonies. Militarism also became the cause of WWII. Japan was hungry for more land and natural resources to supply its war factories; it wanted to take control over all the countries and lands in the Pacific region. For this to happen, Japan took action on December 7, 1941, Japan launched an air raid from Japanese aircraft carriers against the US Naval headquarters at Pearl Harbor, and also 360 Japanese fighter planes. The result was a disaster; altogether 2500 Americans were killed and 1200 were injured. The day after the attack on Pearl Harbor, the U.S declared war on Japan. The last similarities of the cases of the two wars are imperialism. In WWI, many countries had colonies: the French had a large stake in northern Africa and Indochina, Portugal held land in the East Indies, and Belgium had diamond interests in Africa. ...read more.

Another difference is in WWII the policy of appeasement was used to gain more territory and power, and the appeasement wasn't used in WWI. The fear of communism made some people less critical of Hitler and encouraged some politicians to be sympathetic to his demands. Many politicians also viewed that the Treaty of Versailles was too harsh on Germany and that some of its lost territories should be returned. British Prime Minister Chamberlain was the strongest supporter of appeasement yet he was Hitler's greatest political victim. Chamberlain firmly believed that the only way to prevent another world was to give in to some of Hitler's demands. But at the end he realized that Hitler is not to be trusted. The causes of World War I and World War II were in some ways similar, however there were some differences like the alliance system was a major contribution in starting the war however isolationism was a major cause of World War II. However, although there were similarities and differences, both wars took place and resulted in devastating consequences across the world. Word count- 1,125 ...read more.