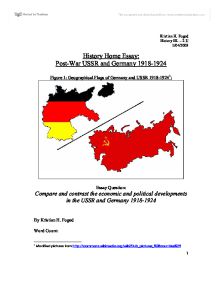 Kristian H. Foged History HL - 2.U 1/04/2008 History Home Essay: Post-War USSR and Germany 1918-1924 Figure 1: Geographical Flags of Germany and USSR 1918-19241: Essay Question: Compare and contrast the economic and political developments in the USSR and Germany 1918-1924 By Kristian H. Foged Word Count: Contents Page Page Number Introduction 3 Body 3 Conclusion 8 Bibliography 9 1918 was a year of great historical significance. On the 11th of November, 1918, Germany signed the armistice with the Allied forces, marking the end of World War I. Accordingly; it was also the year that marked the start of European recovery, after four years of being in the state of total war2, what condition were these countries in; politically and economically? Total war takes its toll on not only on the income of a country, but also on the political institutions in the place at the time; a government will have its fate closely entwined with the outcome of the war it has entered. By 1918, most of Europe was, in broad terms, a mess, however, the situation was better for the victors as they laid claim on reparations and increased the burden of the defeated powers. In the following essay we lay specific focus on the two powerful and notorious countries of Europe; Germany, the aggressor of WWI, and the USSR, the centre of communism. To what extent were these countries, compared to each other, changed politically and economically by the effects of WWI? And what developments were to come in the following years up till 1924? ...read more.

However, even during the war years there were still significant political developments. In March 1919, the Bolshevik party changed its name to the Communist Party. The party had risen up in a time of war and had to consolidate its powers during a war; it therefore had a "readiness to resort to coercion, rule by administrative fiat, centralised administration and summary justice10," it was these principles that made Soviet Russia authoritarian. Another development that added to authoritarianism was the introduction of Centralisation. In 1919, due wartime pressure, power went from the CCCP11 to the two sub-committees: the Politburo and Orgburo12, which became closely entwined with the Sovnarkom13. In contrast to this, Germany had managed to form a National Assembly that met for the first time on the 6th of February, 1919. By July 31st, the Reichstag voted to accept a constitution of federal structure14 and a government of proportional representation. The democratic elections of Germany that year gave a lot of support to the democratic parties. Later though, much of that support shifted to the extreme right and left and by 1921 the democratic parties had lost about 28% of their voters. A democratic Germany led to political instability; 6 different governments over the course of 4 years, and attempts to seize power by force. In March 1920 Wolfgang Kapp and General Luttwitz convinced 12'000 troops to march into Berlin and seize power. The Weimar government was forced to flee as the army refused to fire on their fellow troops. ...read more.

was introduced. The NEP was a compromise between socialism and capitalism, it stopped grain requisitioning and allowed the peasants to store and sell their grain for profit again. This policy, though it was meant to have been temporary, stayed in practice till after Lenin's death in 1924. The years following the end of World War I were ones of pragmatic politics and policies; "an approach in which policies are changed and modified according to circumstance rather than in keeping with a fixed theory.21" The two new political institutions had survived the years up till 1924, and had some political stability and were undergoing economic recovery. A democratic Germany and a communist Russia are two very different ideologies. However, the similarities between them were numerous; these were two countries that had lost WWI and now had new and fragile institutions at their head. Both faced economic crises of hyper-inflation and challenges from other political fractions. Both the USSR and the Weimar Republic strayed from their ideologies in order to fulfil what they saw as the most important task. Using oppressive methods the Weimar Republic survived the hard years of economic crisis and challenges from both the extreme left and right that followed after WWI, and managed to make Germany into a democracy. Similarly, the Bolsheviks and Lenin used oppressive methods, in the form of the Red Terror and against the Whites in the civil war, but to achieve a different goal, one of control over Russia and to establish and uphold a Communist state. ...read more.