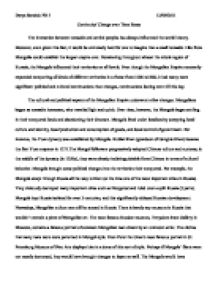 Continuity/ Change over Time Essay. Dominating throughout almost the whole region of Eurasia, the Mongols influenced their territories on all levels.

Darya Barshak PD 5 12/09/2011 Continuity/ Change over Time Essay The interaction between nomadic and settled peoples has always influenced the world history. However, even given this fact, it would be extremely hard for one to imagine that a small nomadic tribe from Mongolia could establish the largest empire ever. Dominating throughout almost the whole region of Eurasia, the Mongols influenced their territories on all levels. Even though the Mongolian Empire constantly expanded conquering all kinds of different territories in a frame from 1206 to1368, it had many more significant political and cultural continuations than changes, continuations lasting even till this day. The cultural and political aspects of the Mongolian Empire underwent a few changes. Mongolians began as nomadic horseman, who traveled light and quick. Over time, however, the Mongols began settling in their conquered lands and abandoning their kinsmen. Mongols lived under localism by accepting local culture and identity, local production and consumption of goods, and local control of government. ...read more.

The Mongol expansion throughout the Asian continent from around 700 to 1200 helped in bringing political stability and re-establishing the Silk Road trade. With rare exceptions such as Marco Polo or Christian missionaries such as William of Rubruck, few Europeans traveled the entire length of the Silk Road prior to the Mongol rule. Quite a number of merchants did not make it through the Silk Road because of bandit groups or lack of needed materials. Thus traders moved products much like a bucket brigade, with luxury goods being traded from one middleman to another, from China to the West, and resulting in high prices for the goods. For instance, Chinese medical bamboo species were worth more than family's monthly income in Persia. However, with the Mongols in power, trade through the Silk Road became much safer and more feasible. To achieve this, Mongols established merchant associations, known as Ortogh. Merchants traveled in groups of 70 to 100 men on each mission, scaring away the bandits and having all the necessary supplies (including camels, horses, and so on) ...read more.

The Mongol Empire had more continuities than changes for various reasons. The Ortogh merchant associations lasted because they were simply very beneficial, and as we know good ideas tend to stay. As the Mongols got out of their original habitats, they got to see the beauty of the world. No doubt that many of them gave up on expanding and decided to settle in more progressive civilizations. Perhaps this is the reason why Mongols failed to produce a huge change - they got busy with their own lives. The Mongols never built a centralized government because they lacked significant experience. They always lived in Nomadic tribes and had no idea of what it meant to rule over a vast territory. It is interesting to notice that once Russia was completely under the Mongolian rule, depending on in its every aspect of life. Nowadays, however, the situation literally flipped around. Mongolia is extremely poor and undeveloped, while Russia is one of the world's leading countries. Now Mongolia has to ask Russia for help, such as lower gas prices, and the reason for all this is that the Mongols didn't learn how to govern themselves throughout all these years. ...read more.