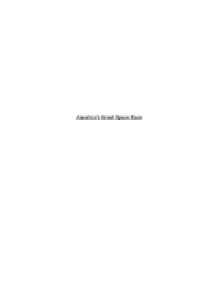 Discuss the Space Race from the USA Perspective.

﻿America?s Great Space Race Harsh Patel 643984 May 28 2012 Word Count: 1896 Mrs. Cross Part A- Plan of the investigation 173 /150 As a developing nation, American involvement with new technology posed of great importance in the global affairs. The idea of space exploration was brought into public eye by the U.S.S.R with the launch of Sputnik in 1957. As a result, the U.S. government felt intimidated by such significant scientific progress in the hands of another country. To what extent has the development of the Soviet Union within space technology, from 1950 to 1960, influenced Americans and their inquiry into outer space? This investigation will analyze the extent to which the technological achievements of the Soviet Union greatly influenced the United States to battle for supremacy. The perspective of the U.S. will be mainly examined with limited views of the U.S.S.R. regarding the Space Race. American astronaut and presidential speeches will be included to indicate the distinct influence of the space race within society. Two sources that will be critically analyzed are: The First Men in Space by Gregory P. Kennedy and a documentary, A century of flight: The space race by Creation films. ...read more.

The book also consists of many presidential speeches and astronaut?s perspective towards the topic of space race. There are few to no limitations of this source, since this book covers everything during the start of the space race to the end from both, U.S. and U.S.S.R. perspectives. The value of this book is significant due to the fact that the author was an American and a part of the National Space Center, which reflects on his book as is more biased towards American viewpoints. The second source to be examined in detail is a documentary by Creation Films, A Century of Flight: The Space Race, with the purpose to demonstrate the successes into space by both, U.S. and U.S.S.R. which is now described as the space race. It was created in 1 April, 2011, in Chatsworth, California by director Edward Feuerherd, and writer & editor by Michael Fitzer, distributed by Image Entertainment, Inc. The film had no limitation at it is solely based on primary videos from the space race era and guided by commentator, Don Pay, presenting concrete facts and limited perspective. Much similar to the first source, these American producers focused a little more on the U.S.A.?s which shows the teams favored perspective on the space race, demonstrating the value of this documentary. ...read more.

Kennedy had pledged America to reaching the Moon before the decade is out, skillfully finessing the nation?s short?term prestige loss in space by redefining the ultimate contest as one that America had a chance of winning. On July 20, 1969, Neil Armstrong became the first human to set foot on the moon with the landing of Apollo 11.[22][23]This ultimate goal had been achieved as head of states all over the world sent congratulation messages, outlining the American victory in the space race. Part E- Conclusion146 /200 The soviets clearly dominated in the space race during the beginning of the 1960?s with successful space operations and new technology and exploration in the solar system. The United States was intimidated by such speed of progress which leads to the creation of NASA in a desperate attempt to close the gap between space advancement. Quickly, the U.S caught up and took the lead after 1965, with many successful launches of manned mission in space by using new spacecraft technology due to the influence of Soviets. President Kennedy redefined the goal of space race of landing the first man on the moon, in hope to win the space exploration. Despite America?s struggles, they ended the space race with the launch of Apollo 11, making Neil Armstrong the first human on the moon. Sputnik had begun the Space Race with fear. Apollo 11 ended it with hope. ...read more.