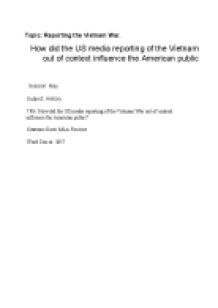 Extended Essay History: How did the US media reporting of the Vietnam War out of context influence the American public?

Marshall McLuhan supported this in 1975 when he said "Television brought the brutality of war into the comfort of the American living room. Vietnam was Jost in the living rooms of America, not on the battlefields of Vietnam (The Media and the Vietnam War, Truthful or Deceptive). A good example of television being used as a medium for reporting events taken out of context during the Vietnam War is the film of the Cam Ne incident. The Cam Ne film shows American marines setting a village house on fire with no visi ble threat or opposition, creating the impression to the American public that the US military was cruel and inhumane. The film did not reveal the fact that the reason the marines were burning down the village house was to prevent the sniper fire and other assaults on the US mili tary which had cost the US military a significant number of casualties. However, the most important impact of television is that it brought images of war 6 ________________ into American households on a regular basis, American households that were completely unprepared for the horrors of war. At the time, approximately 22% of all television coverage of the Vietnam War showed combat ( Hallin 129). While this may seem low. one must consider the fact that TV coverage of the Vietnam war was very prominent, so the 22% actually amounts to a sizable amount of combat coverage. This relatively large amount of combat coverage in a sense takes the combats being covered out of context because television coverage rarely had time to give background to the events giving rise to the combat or combats being shown on television (Hallin 209). It is easy to see how the American public could easily and very quickly become very negative about the Vietnam War as they were regularly exposed in their unprepared homes to the harsh realities of war without many of the mitigating factors of which they would have been informed had the combats been shownin context. ...read more.

For example, CBS' Bureau manager made mention of some footage produced about an isolated firefight in an insignificant hamlet in Vietnam in which only one American was killed (Braestrup 36). While the death of the young so1dier is tragic, given the number of other soldiers, which had been killed in much more dramatic and sign1ficant battles, the significance of his death is relatively low. The US media's focus on the incident, however, distracted viewers away from some of the larger issues raised by the war and placing such a strong focus on the event took the event out of context. By doing this, the American public was continually presented with depressing news day 12 ________________ after day, that in the scheme of things was not very important, but was made important because of the media. In conclusion, it is important to understand that at different times of the war the media took more events out of context than others with different effects on the American public. My research has shown that a wide variety of factors are responsible for leading the media to report on Vietnam War events out of context. Factors such as much of the war infom1ation coming from the US government, the lack of experienced reporters and reporters who could understand the Vietnamese language and culture, the impact of television and photographs; the media's lack of willingness to address larger questions; the pressure on US correspondents to report on dramatic stories and the competition among the US media to report on sensational stories. All of these factor's resulted in the media often unknowingly taking the Vietnam War out of context, resulting in the American public not fully understanding the war, having largely a negative reaction to the war which increased over time and ultimately resulting in widespread protests and opposition. It is also important to note that the lack of censorship by the American government and the American government's own hesitations about infom1ing the journalists about the Vietnam War also played an important role in the outcome of the war. ...read more.