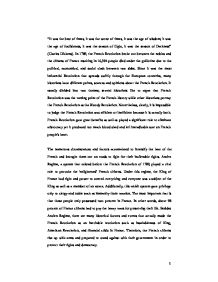 "It was the best of times, it was the worst of times, it was the age of wisdom, it was the age of foolishness, it was the season of Light, it was the season of Darkness" (Charles Dickens). In 1789, the French Revolution broke out between the nobles and the citizens of France resulting in 16,594 people died under the guillotine due to the political, economical, and social clash between two sides. Since it was the most influential Revolution that spreads swiftly through the European countries, many historians have different points, sources and opinions about the French Revolution. It usually divided into two themes; several historians like to argue that French Revolution was the turning point of the French history while other historians portray the French Revolution as the b****y Revolution. Nevertheless, clearly, it is impossible to judge the French Revolution was efficient or inefficient because it is actually both. French Revolution gave great benefits as well as played a significant role to eliminate aristocracy yet it produced too much blood shed and left ineradicable scar on French people's heart. The numerous circumstances and factors accumulated to intensify the heat of the French and brought them out on roads to fight for their inalienable rights. Ancien Regime, a system that existed before the French Revolution of 1789, played a vital role to provoke the 'enlightened' French citizens. Under this regime, the King of France had right and power to control everything and everyone was a subject of the King as well as a member of an estate. Additionally, this unfair system gave privilege only to clergy and noble such as immunity from taxation. The most important fact is that these people only possessed two- percent in France. In other words, about 98 percent of France citizens had to pay the heavy taxes for preserving their life. Besides Ancien Regime, there are many historical factors and events that actually made the French Revolution as an inevitable revolution such as insatiableness of King, American Revolution, and financial crisis in France. ...read more.

In 1789, the French Revolution produced another historical event which is known as the Great Fear. Most of the historians advocate this event was one of the main reasons that make the French Revolution as the b****y Revolution. However, in fact, Great Fear had quite positive results and features. First of all, it created militias to organize themselves in a more efficient manner (Rude 49). In addition, it gave an impetus to "the progress of the Revolution in the provinces" (Rude 49). Despite of its negative points, Great Fear has quite good points that represent the French Revolution. Furthermore, the Great Fear actually brought the August Decree in 1789 which was the law that ended the feudal system in France and abolished noble rights and clerical system, It decrees that, among the existing rights and dues, both feudal and censual, all those originating in or representing real or personal serfdom shall be abolished without indemnification (Article I). Clearly, the French citizens made the aristocrats to surrender their especial privileges and reinforced their rights and equality. The reason why this is one of the positive points about the French Revolution is because it gave great impact on French citizens economically, politically, and socially. A source similar to the Constitution of 1791, the French Revolution produced the fundamental document called the Declaration of the Rights of Man. This basic document was adopted by the National Assembly in 1789. The most noted French politicians designed this document such as Montesquieu, Locke and Rousseau which means the French document is heavily dependent on the politicians. Several historians portray the Declaration of the Rights as the 'voice' of the Third Estates. In other words, the Declaration of the Rights includes rules that assert natural rights for the French citizens and all men without exception. It emphasizes "all the citizens, being equal in the eyes of the law, are equally admissible to all public dignities, places, and employments" (Article VI). ...read more.