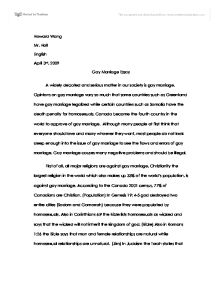 Howard Wang Mr. Hall English April 3rd, 2009 Gay Marriage Essay A widely debated and serious matter in our society is gay marriage. Opinions on gay marriage vary so much that some countries such as Greenland have gay marriage legalized while certain countries such as Somalia have the death penalty for homosexuals. Canada became the fourth country in the world to approve of gay marriage. Although many people at first think that everyone should love and marry whoever they want, most people do not look deep enough into the issue of gay marriage to see the flaws and errors of gay marriage. Gay marriage causes many negative problems and should be illegal. First of all, all major religions are against gay marriage, Christianity the largest religion in the world which also makes up 33% of the world's population, is against gay marriage. According to the Canada 2001 census, 77% of Canadians are Christian. (Population) In Genesis 19: 4-5 god destroyed two entire cities (Sodom and Gomorrah) because they were populated by homosexuals. Also in Corinthians 6:9 the Bible lists homosexuals as wicked and says that the wicked will not inherit the kingdom of god. ...read more.

Many people who agree with gay marriage say that they should be able to marry a person of the same gender because they love each other. What if a brother and a sister wanted to marry each other because the loved each other? Both same family marriages and gay marriages pose serious health risks. A Canadian study in 1997 found that male homosexuals have a life expectancy of 20 years less than the average male. (Deem) Many homosexuals also claim that they should have equal rights. However homosexuals already have equal rights. If gay marriages are illegal for example I can't marry a member of the same gender and neither can a homosexual person so homosexuals aren't asking for equal rights they are asking for extra rights. By asking for extra rights, legalizing gay marriage can cause other people to think that they should receive extra rights as well and can cause a chain reaction that can only have negative effects. Lastly, gay marriage will harm society. If gay couples were allowed to marry, they would not be able to give birth so they would have to adopt a child. ...read more.

The 100 men outside the church broke the windows and shouted that that they wanted no gay man to be buried here and that everybody inside the church leaves or else they were going to kill them. Although this behaviour is not correct, it shows that numerous people discriminate against homosexuals and will most likely also discriminate against the children of gay couples. Gay marriage does not help the common people because it decreases the population, it does not help religion because homosexuality is frowned upon in all major religions, It also does not help the children that gay couples adopt because they will be laughed at, tormented and may become gender confused. Then who does gay marriage positively affect? Gay marriage only positively affects a small group of homosexuals because they will receive marriage benefits, save money on taxes due to their married status and have more sexual interactions with a member of the same gender. Because Gay marriage only positively affects a very small group of people in a selfish way and negatively affects almost everything else including their children, Gay marriages should be illegal. ...read more.