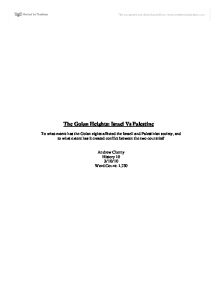 The Golan Heights: Israel Vs Palestine To what extent has the Golan eights affected the Israeli and Palestinian society, and to what extent has it created conflict between the two countries? Andrew Cherny History 10 3/10/10 Word Count: 1,750 History IA: Golan Heights Plan of Investigation: This investigation aims to assess the relationship of the Israeli and Palestinian population and the effect of the Golan Heights has on Israel and Palestine. The investigation will work between the dates of the Six-day war, to the present day. In order to answer the question, evidence will be based on analyzing sources formed on dealing will both Israeli and Palestinian beliefs, the Golan Heights and the conflict it has created, and the ethnic war that continues to be ablaze. Summary of Evidence: "The June 1967 War was a watershed event in the history of Israel and the Middle East. After only six days of fighting, Israel had radically altered the political map of the region. By June 13, Israeli forces had captured the Gol1an Heights from Syria. . In Israel, the ease of the victory, the expansion of the state's territory, and the reuniting of Jerusalem, the holiest place in Judaism, permanently altered political discourse (Studies/Areas Handbook, excerpt)." ...read more.

Also it has great geographical information that gives detailed descriptions on the land of the Golan Heights. One limitation of this source is the time at which the source was written, 2002. Although this is not that far back in history, it may be hard for this source to give accurate information dealing with the 1967 six day war, or the 1973 Yom Kippur war. Procon.org is a website that gives the pro's and con's of controversial subjects in the world. This source has 2 parts that deal with the Golan Heights and the on going disputes between Israel and Palestine. The sources purpose is to analyze the arguments and steps taken forward to deal with this conflict in the Heights between Palestine and Israel. Some values of this source are that there are 2 parts of the source that are quotes from important ambassadors that deal with the problems within the heights and the steps they will take to create peace between the two countries. Some limitations of the source are that some of the quotes are from news broadcasting groups and specialist from other areas of the world, so there is always the question of being bias. ...read more.

This is why it is a valuable area to own. Water is very scarce in this area of the world and it helps to always have more of it. The population of Syria is far greater then the population of Israel, this is one of the reasons why Syria wants the Golan Heights back, so that they can gain a greater amount of water (Dacey-Barnes, 1-3). Conclusion: To what extent has the Golan eights affected the Israeli and Palestinian society, and to what extent has it created conflict between the two countries? To this day, these two countries continue to fight over this area of land due to the strategic importance of the area, the agricultural advantages it supplies. From the day that Israel captured the Heights after the 1967 six-day war, the Palestinian government has demanded it back, yet Israel continues to deny them the right of owning it. The Heights has created a large amount of conflict between the two countries because it has created tension between the two, and caused ethnic rivalry and terrorist attacks. A silent war continues to be fought over this land, and will continue unless a peace treaty is made between Israel and Palestine. Therefore, the Golan Heights has created an everlasting affect on both Israel and Palestine and the way that these countries societies treat each other from now on. ...read more.