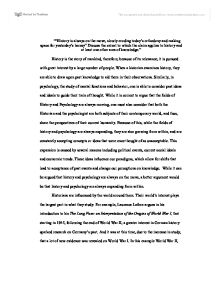 Hisory is Always on the Move

""History is always on the move, slowly eroding today's orthodoxy and making space for yesterday's heresy" Discuss the extent to which the claim applies to history and at least one other area of knowledge." History is the story of mankind, therefore, because of its relevance; it is pursued with great interest by a large number of people. When a historian examines history, they are able to draw upon past knowledge to aid them in their observations. Similarly, in psychology, the study of mental functions and behavior, one is able to consider past ideas and ideals to guide their train of thought. While it is correct to argue that the fields of History and Psychology are always moving, one must also consider that both the Historian and the psychologist are both subjects of their contemporary world, and thus, share the perspectives of their current humanity. Because of this, while the fields of history and psychology are always expanding, they are also growing from within, and are constantly accepting concepts or ideas that were once thought of as unacceptable. ...read more.

a parallel to Andrew Jackson's election of 1828 or Abraham Lincoln's of 1860, where a new party enters office, one must understand that these new political ideas, in this case arguably spurred by emotion, has caused a shift in paradigms in America, which thus completely alters how we viewed the past, and in this case allows to embrace past aspects. Some view Obama's election as president as closure to the Civil Rights' woes that afflicted this nation's past, therefore several connections are made. Statements such as Steven F. Lawson's "In becoming commander in chief, Obama has inherited the legacy of countless civil rights warriors who risked their lives and many who lost theirs, to gain the right to vote, not as an empty symbol, but as a genuine tool for freedom and equality" serve to prove that the civil rights movement is now approached in a new light as the beginning of progress, and that the election is a continuation. This direct connection that is argued to exist between the election and the civil right's movement, could not exist five years ago, and therefore approaches on the civil right's movement five years ago, could not take in as much as it could now, with the election of Obama expanding the viewpoint. ...read more.

Damasio sought patients who had suffered brain injury and as a result lost all perception of their own feelings. Damasio found that the patients' lives "quickly fell apart." Many made poor investments and many others wasted hours deliberating over irrelevant details. The results showed that "proper thinking requires feeling. Pure reason is a disease." Now emotional processing is now found with ease throughout the field. This new discovery does not move the field of cognitive psychology from one point to another, but instead expands on the previous notions the cognitive approach had already established. When a historian examines history, they draw upon knowledge of the past knowledge to guide their observations. Similarly, in psychology, specifically cognitive psychology, one must consider past ideas and ideals to guide their train of thought. It is essential in analyzing the two fields to consider that both the historian and the psychologist are both subjects of their contemporary world, and thus, share the perspectives of their current society. Therefore, the fields of history and psychology are always expanding, and this expansion occurs from within, which allows for new concepts and ideals that were once thought as unacceptable, to be embraced. ...read more.